All the clues from ‘The Masked Singer’ Season 8 to date

'The Masked Singer' airs Wednesdays at 8pm ET on CTV, CTV.ca, and the CTV app.
by Amber Dowling

Billy Joel, is that you?

The Masked Singer is back for an epic eighth season and this time around the show promises to be bigger and bolder than ever. That’s because, in addition to a brand new format, this season features 22 new masked celebrity contestants — the most we’ve ever had.

Another twist? This year each of the costumes are also clues. That means we’re already putting together out best guesses ahead of the show’s big return on Sept. 21. This year the contestants boast a combined 32 Grammy nominations, 16 Emmy wins, eight Gold albums, four Golden Globe nominations, 42 books, 10 Teen Choice Awards, and five Stars on the Hollywood Walk of Fame.

Curious to see which larger-than-life costumes will be featured this year, as well as what clues we can glean from them? Read on to see all 22 costumes as well as any identifying hints they may contain. 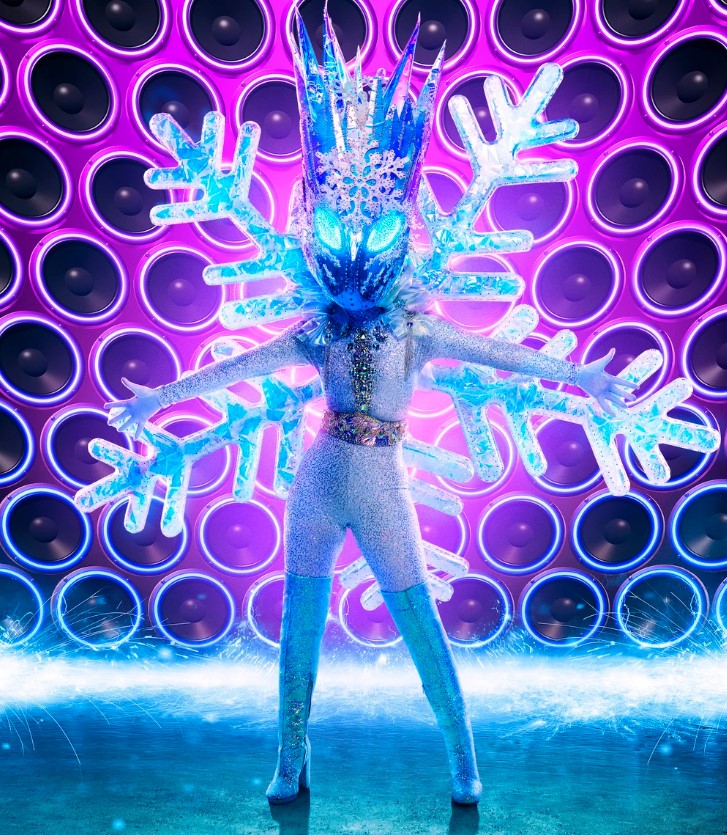 Features to note: Ever wondered what would happen if Groot ventured into the land of Frozen? We imagine it would look something like this silvery snowflake.

Who it could be: Let’s just say Taylor Swift. Because of the scarf featured in the X-Ray clue. 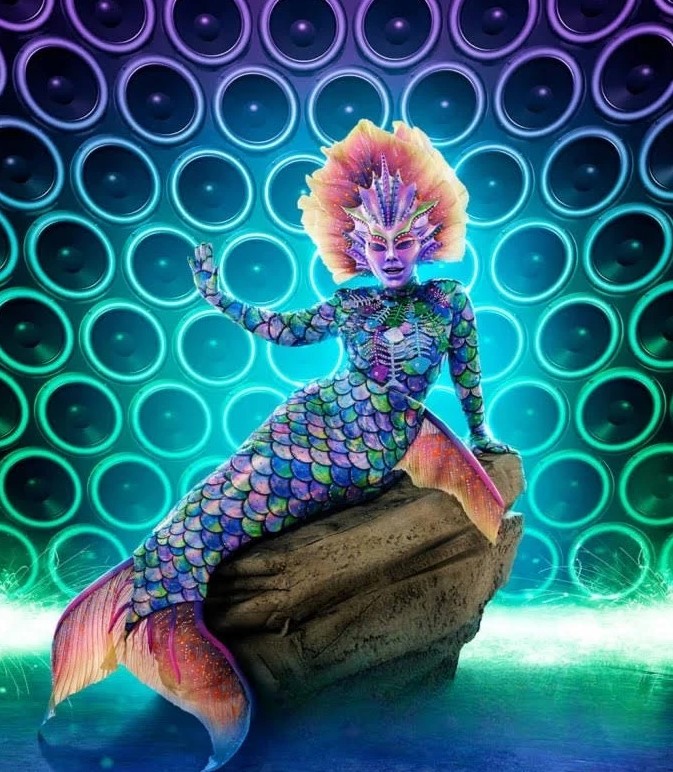 Features to note: Is this mermaid sitting on a stone out of convenience or will she be making a splash from that perch?

Who it could be: Ali Stroker

She says she’s simply the best

Had a horrible accident and setback, and thought she would never be the same

She has performed for princes and paupers

Has a song in the Library of Congress

Who it was: Gloria Gaynor, famously sang the 1978 song “I Will Survive.” 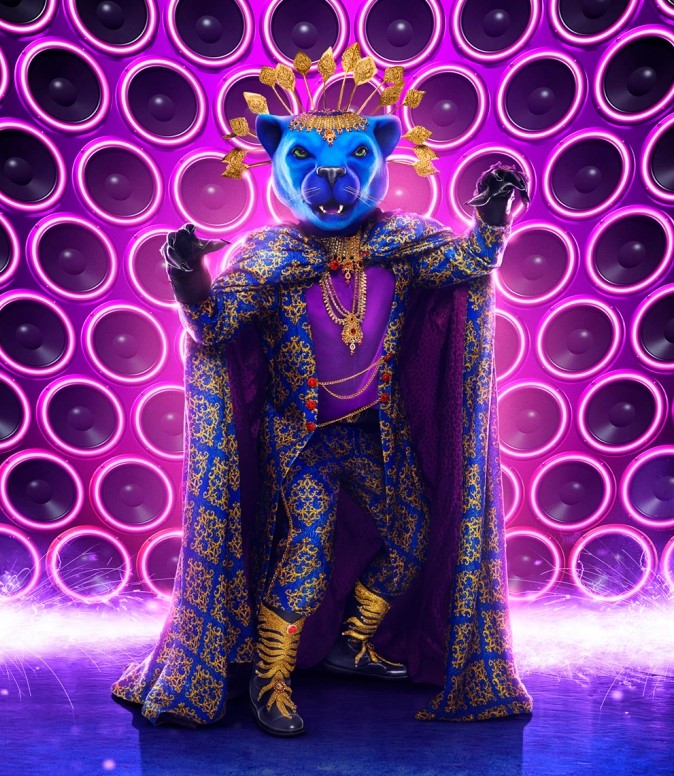 Features to note: This feline isn’t the first cool cat to be featured on the show, nor will they be the last. But pay attention to the royal blue cape and the gold headdress, not to mention all that bling and the blue fur colouring.

Who it could be: Cam Newton, of Carolina Panthers fame.

Who it was: Montell Jordan, of “This Is How We Do It” fame. 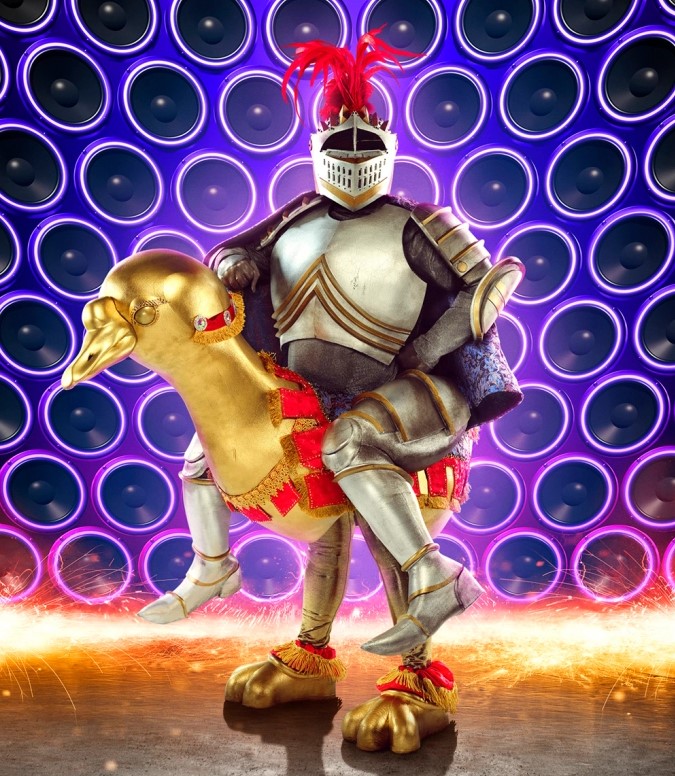 Features to note: This knight in shining armor is riding a golden goose, not a steed. Also, those red feathers are downright regal.

Who it could be: Scot Disick

Who it was: Canadian icon and Captain Kirk himself, William Shatner 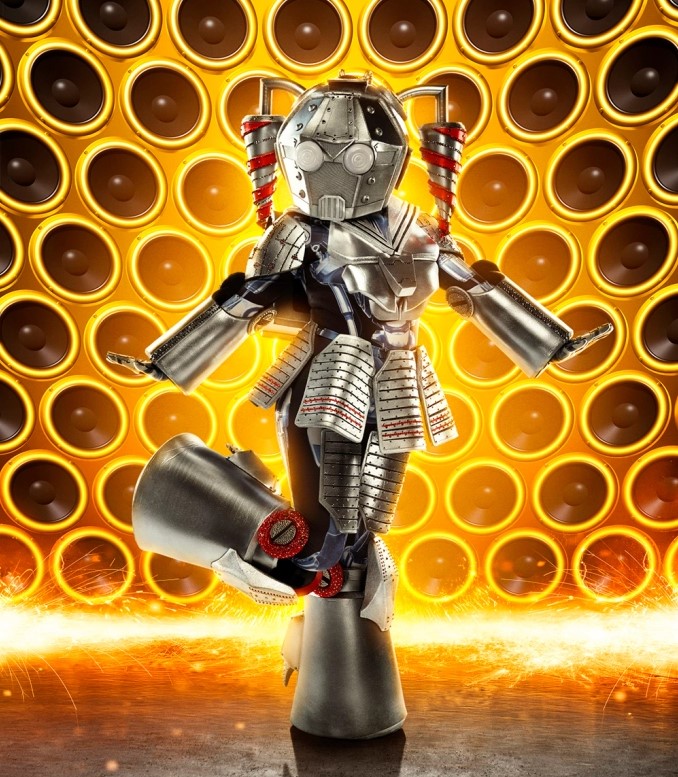 Features to note: Lil Wayne was already Robot, which is worth noting when taking in this female costume counterpart. Add in an epic hairstyle and fashion details, and we could be talking about a queen here.

Who it could be: Lil Kim, Jennifer Love Hewitt, Sarah Silverman

Mentions of Pharrell and David Blaine in the clue package

Honey in the clue package

She holds her own while touring with a multi-Grammy winner

Who is was: Kat Graham, of The Vampire Diaries 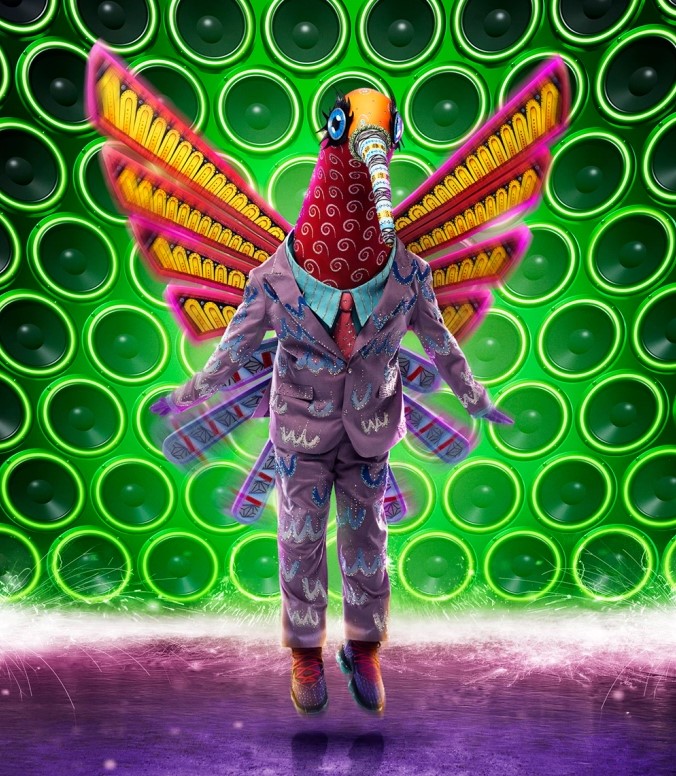 Features to note: This tiny but mighty bird has a full-out suit rather than feathers, but the bright colours and sparkly kicks are also things to pay attention to.

Who it could be: Spencer Pratt, a.k.a. the hummingbird whisperer

Who it was: NSYNC singer Chris Kirkpatrick 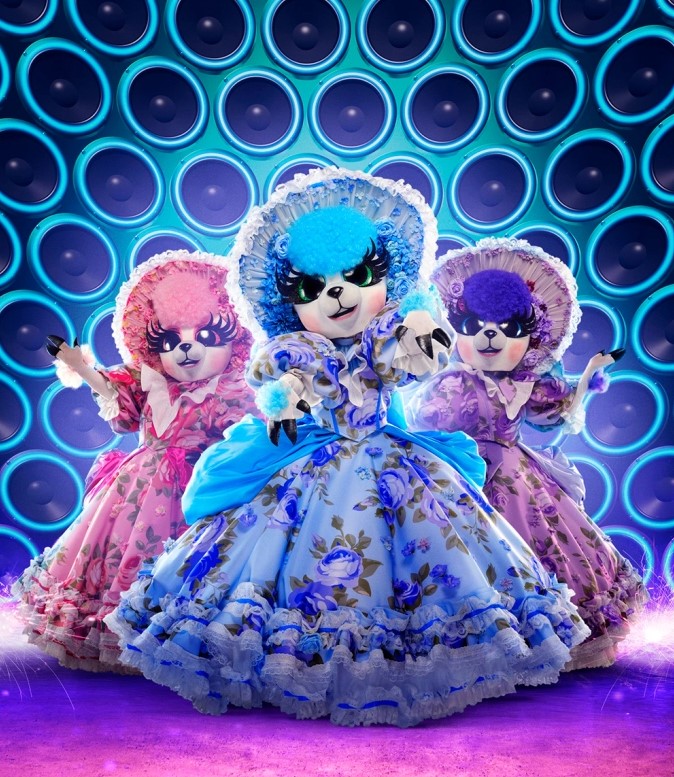 Features to note: These lambs are dressed like Bo Peep, so we may want to sing the classic nursery rhyme to ourselves before catching their performance.

Who it could be: The Chicks, who refused to be political lambs or HAIM

A pair of jeans with the word “famous” on the back

They grew up as “Beverly Hills” besties

They once worked with Paul McCartney

They have travelled the world and been on billboards

They are very familiar with red carpets

A TV and roll of film

‘90s night clue: “Go your own way and cruise the country with your besties! Turn those daydreams into… a reality!” 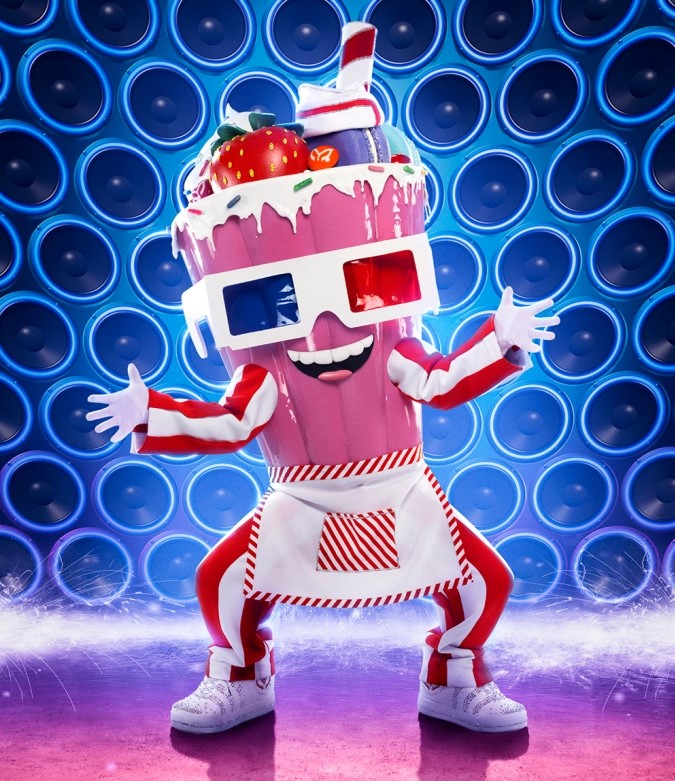 Features to note: Will this milkshake bring all the boys to the yard? Time will tell. For now, we’re particularly interested in those 3D shades and the macrons on top of the costume, however.

Who it could be: Cardi B did recently launch a spiked whipped cream line…

Dropped a mixtape that was “certified fire”

Who it was: American football running back Le'Veon Bell 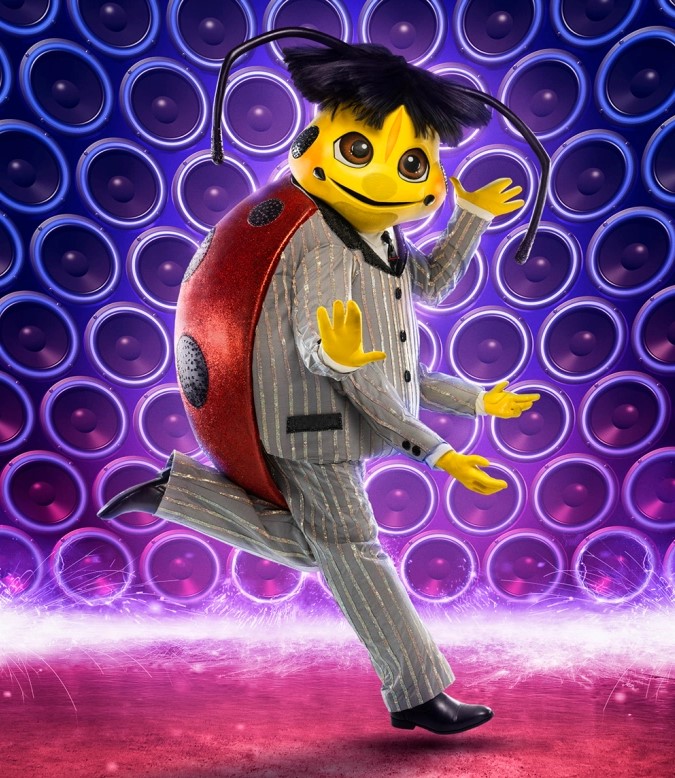 Features to note: Kelly Osbourne was the original ladybug, so who is this male version of the costume? The pinstripe suit and black Warhol hair may be clues…

Who it could be: Jesse Tyler Ferguson, Jerry Springer

Says he is a “bug in a million”

Courtroom in the clue package

He has a history of public service and knowledge,

Who it was: Jerry Springer, out of semi-retirement to do the show after years of the panelists guessing him. 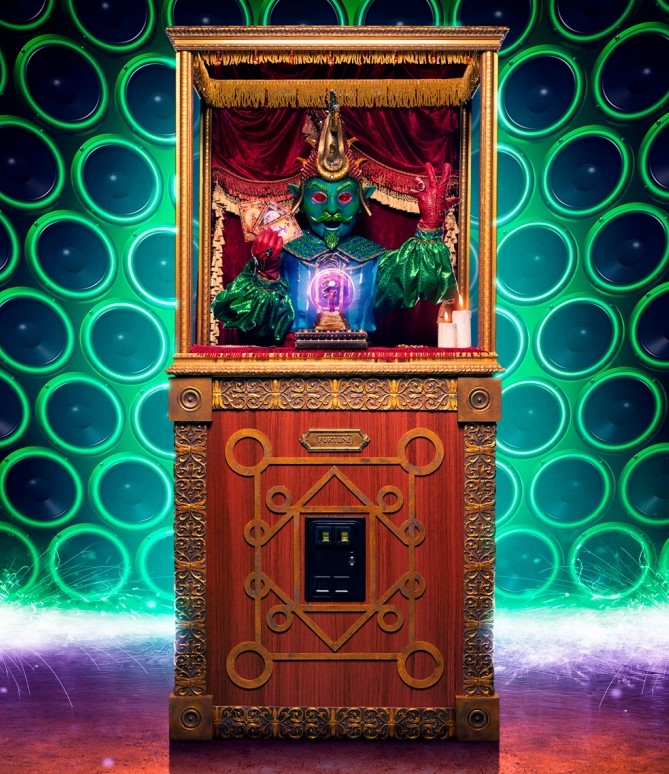 Features to note: This constrictive costume means we might not have a dancer on our hands, but then again who knows with this show. What we do know is we’re paying extra attention to the cards Fortune Teller holds: photos of past contestants Sun, Snow Owls, and Lemur.

Who it could be: Billy Joel, who was married to Christie Brinkley (Lemur) and has performed with LeAnn Rimes (Sun). Oh, and Clint Black (one of the Snow Owls) played harmonica for Joel during the recording session for “Light As The Breeze.”

Who it was: Daymond John 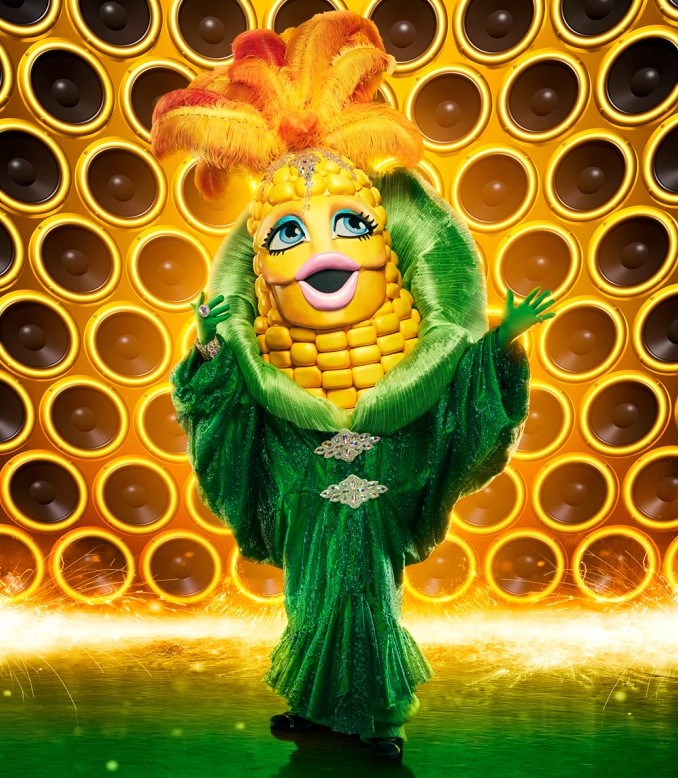 Features to note: This isn’t just any regular old ear of corn — it’s a French ear of corn. Add in that headpiece and glittery green frock and this costume screams old Hollywood glam.

Who it could be: We had Macy Gray vibes before we learned Maize was a man.

Has been an emcee

Maize mentions “frozen to their seats,” which could mean Frozen.

Who it was: Mario Cantone, of Sex and the City 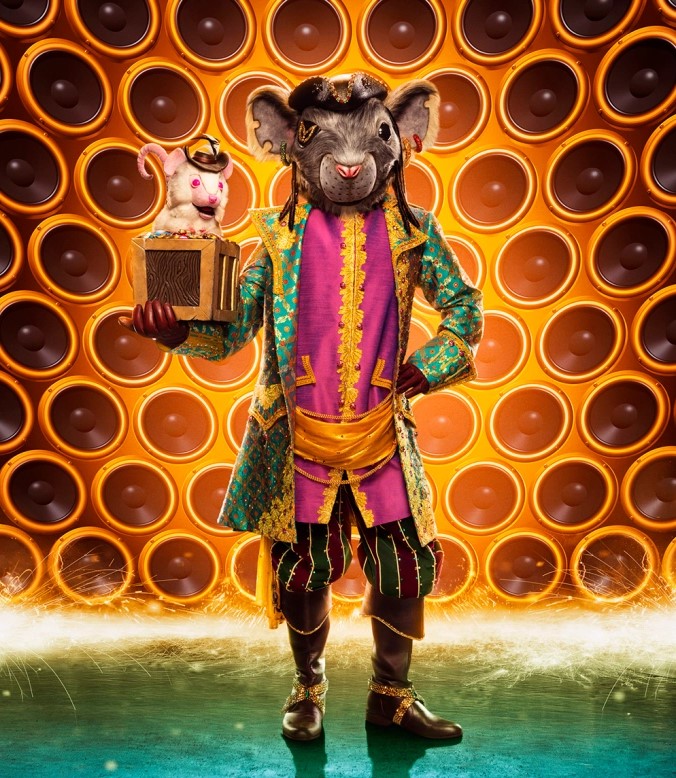 Features to note: It’s not a pirate, it’s not a rat, but it’s a strange combination of both. We have a feeling this celeb has seen some things in his life, but we’re also paying particular attention to that mini rat in his hand.

Who it could be: Pauley Shore

Who it was: Ventriloquist Jeff Dunham

Features to note: All that glitters is gold with this impressive costume, which is slightly ethereal in nature. We have a feeling this is one powerful singer and someone with an understated but impressive stage presence.

Who it could be: Amber Riley 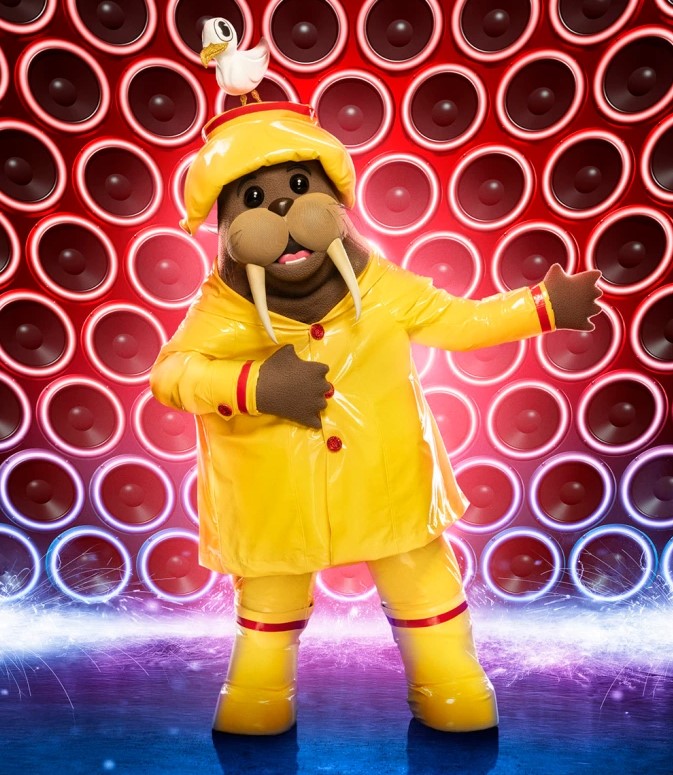 Features to note: A walrus in a rain jacket with a seagull on its head? Looks like this walrus is going fishing. It’s also one of the cutest costumes in Masked Singer history.

Who it could be: Jordan Fisher

Career began in the ‘90s

Has tap-danced with a late-night legend

Heart with a musical note on it

Who it was: Joey Lawrence, one of the ultimate ‘90s superstars (Blossom). Woah! 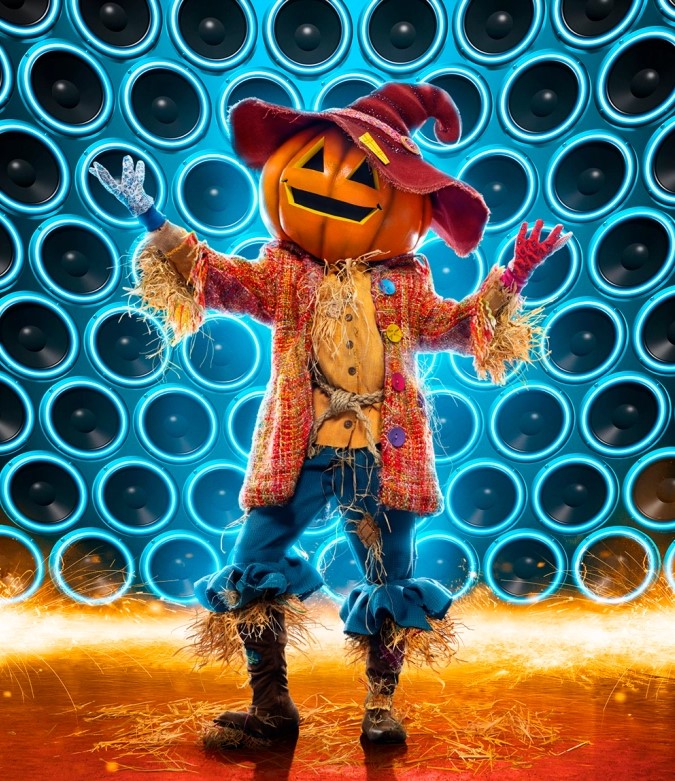 Features to note: Just in time for Halloween, this pumpkin-of-a-scarecrow is here to give us all the treats. Could this be a Halloween lover or someone tied to scary movies? Heck, maybe there’s an Oz connection in there too. Whoever it is, there’s a crow connection that has to be a clue.

Who it could be: Conan Gray, whose debut album was Kid Krow. 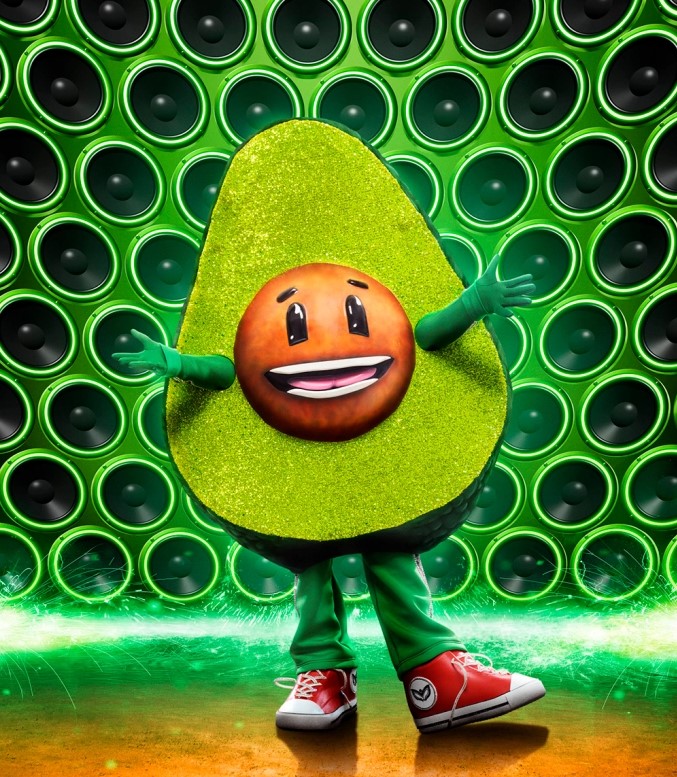 Features to note: Could this avocado be from Mexico, like the famous brand? Or perhaps the contestant hails from sunny California?

Who it could be: Ken Jeong, pulling a Nick Cannon. 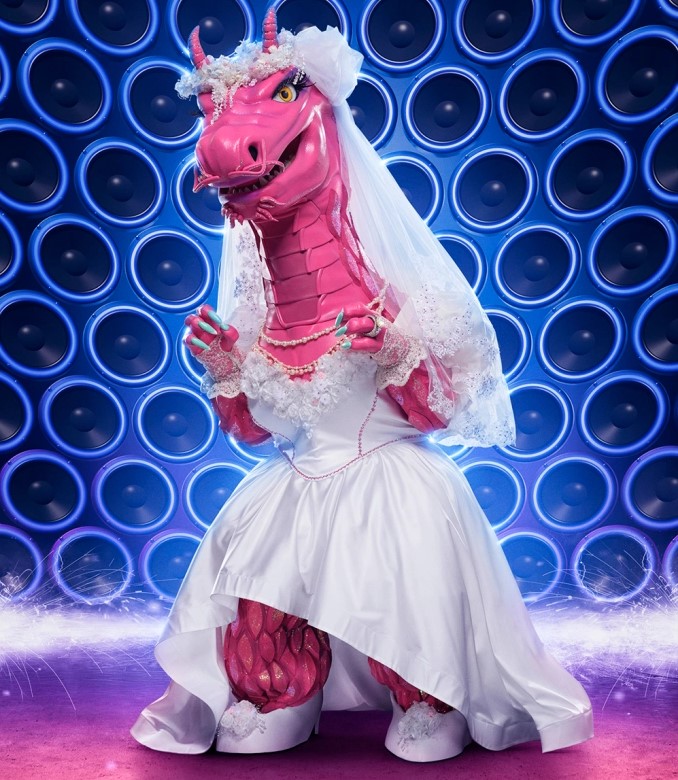 Features to note: This costume brings a whole new meaning to the term 'bridezilla'. Now the real question is, is this contestant one in real life, or did she just play a bride who stressed over every single last detail until the big day?

Who it could be: Jennifer Tilly, a.k.a. Bride of Chucky

Features to note: This is either one tall performer or they’ve got a freakishly strong neck. Either way, we’re getting total Little Shop of Horror vibes here.

Who it could be: Rick Moranis. Or if we’re focusing on the fly portion of the costume, Lenny Kravitz. 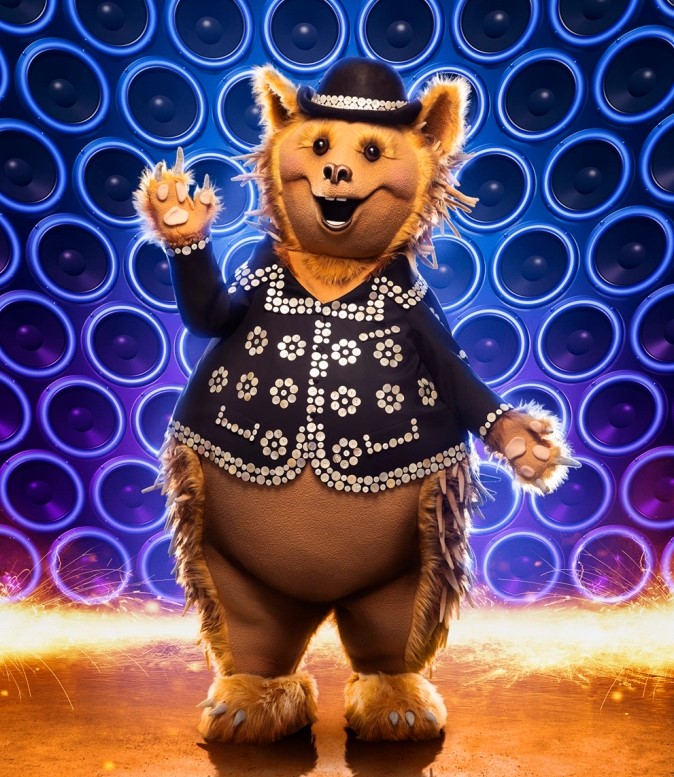 Who it could be: Jerry Springer

Who it was: Monty Python actor Eric Idle 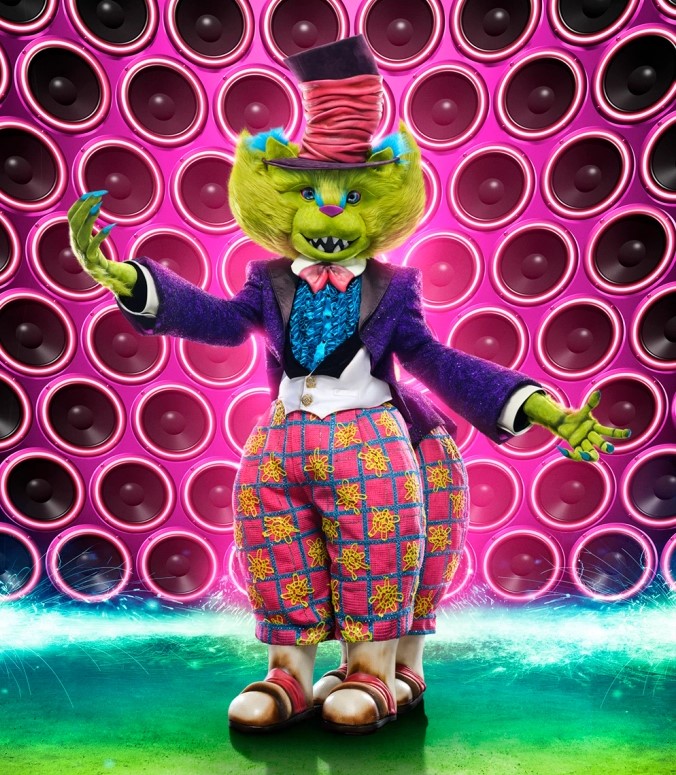 Features to note: This costume is what would happen if Willy Wonka and the Mad Hatter had a baby. It’s also worth noting there are four legs to this costume, so we could be dealing with two performers instead of one.

Who it could be: Darren Criss 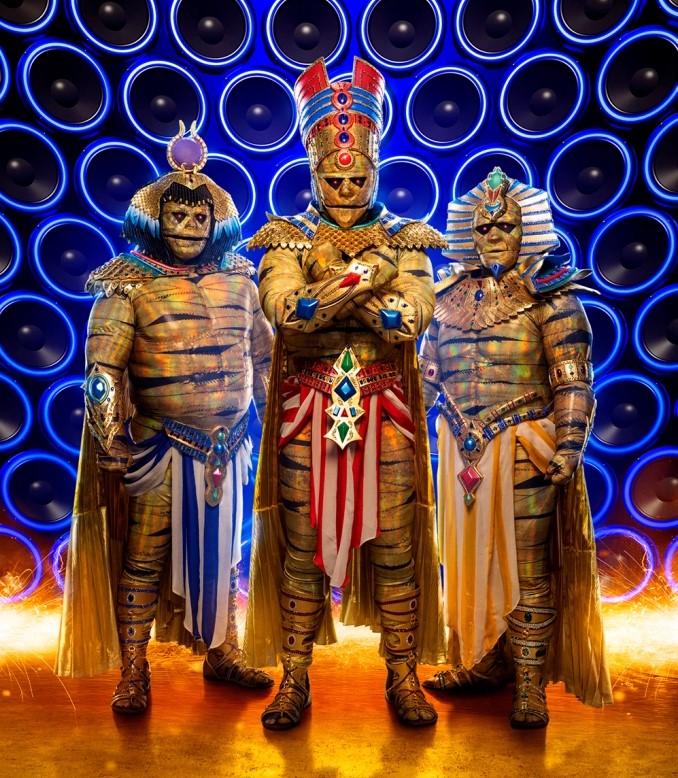 Features to note: Another trio? Another trio. These impressive costumes are unique but also feature similar details, like the creepy red eyes, belts, and wraps that are clearly doing a poor job of containing all those muscles.

Who it could be: Steve Martin of “King Tut” fame, Martin Short, and Chevy Chase.

-          The guys say siblings are close, leading us to believe they’re brothers

Who it could be: the Wayans Brothers.

Who it was: The Brady Bunch boys, a.k.a. Barry Williams, Christopher Knight, and Mike Lookinland 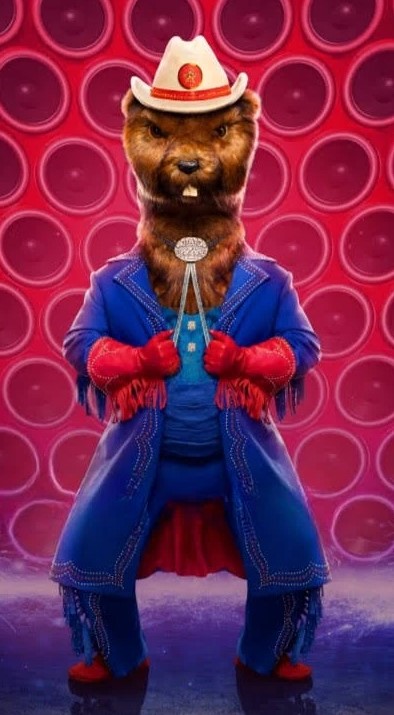 Features to note: A cowboy getup and country singer vibes for sure.

Who it could be: Let’s go with Lil Nas X.