Halleloo! The queens are back and not a moment too soon. Fresh off its seven Canadian Screen Award wins, Canada’s Drag Race returns for its third season and the competition is set to be capital-F FIERCE.

Missed out on the first two seasons of Drag Race? Stream them now on Crave.

This time ‘round the 12 sensational contestants are competing for the heady prize of $100,000 and, natch, the fame and adoration that comes with the country’s top drag crown. So get ready to rock your body-ody-ody and marvel at the mamas and their spectacular snatches, because these diverse queens represent the best and brightest stars from St. John’s to Victoria. It’s truly set to be a Canadian eleganza extravaganza like never before.

Season 3’s charismatic cohort will be joined by the now legendary CDR judges–#QueenoftheNorth Brooke Lynn Hytes, TV personality and celebrity stylist Brad Goreski; and Etalk Senior Correspondent Traci Melchor. And like always, the iconic quartet will be joined by a surprise guest judge each and every week.

The nine-episode third season premieres on Thursday, July 14 at 9 p.m. ET, and is available to Canadian audiences in English and French on Crave. Subsequent new episodes drop Thursdays at 9 p.m. ET. Season 3 is also set to launch on Thursday, July 14 on World of Wonder’s SVOD platform WOW Presents Plus, in the U.S. and in more than 160 countries around the world.

You might have to wait for July to see them in action, but you can get acquainted with the drag competitors below now:

Meet Bombae. This queen immigrated to Canada in 2016 and is ready to show the world that India’s got an avid avant guarde scene too! When she’s not out there spreading the word and serving major realness, this fashion-club kid is sketching in her lookbook and creating all of her own drag designs. 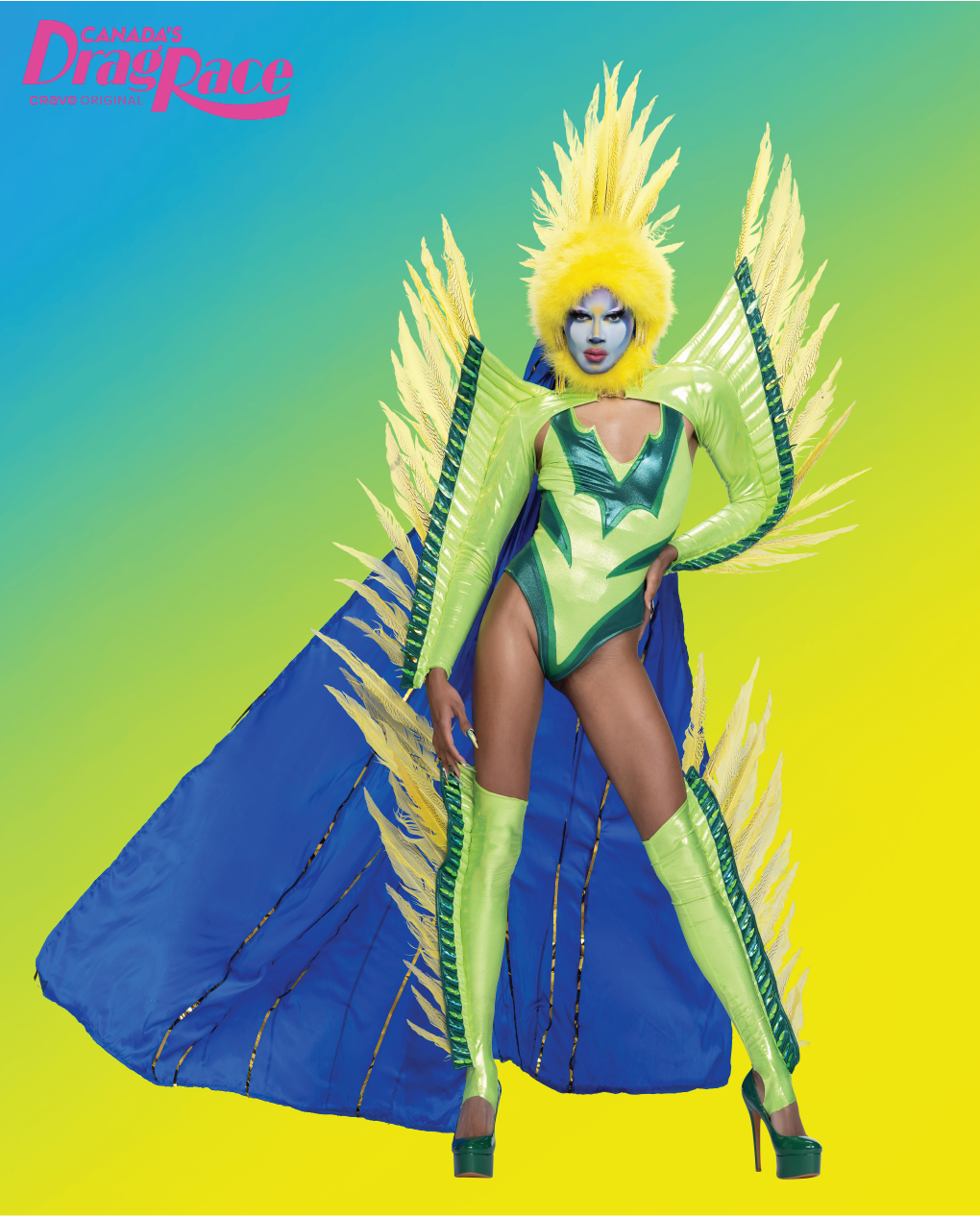 Then there’s Kaos, who’s been a part of the Imperial Sovereign Court for years and has been both Princess and Duke in Manitoba and Princess in Calgary. They’ve also been named Miss Twisted in Calgary and even won the Miss Club Kid pageant in Edmonton. As if conquering the Canadian West wasn’t enough, this dedicated, badass queen is a vet of musical theatre and spends time as a gymnast, cheerleader, circus performer, spin instructor, boxer, hair stylist and designer.

“Kaos likes to f**k with gender, f**k with people’s heads, and when you watch Kaos perform, you’re like - what the f**k just happened?” 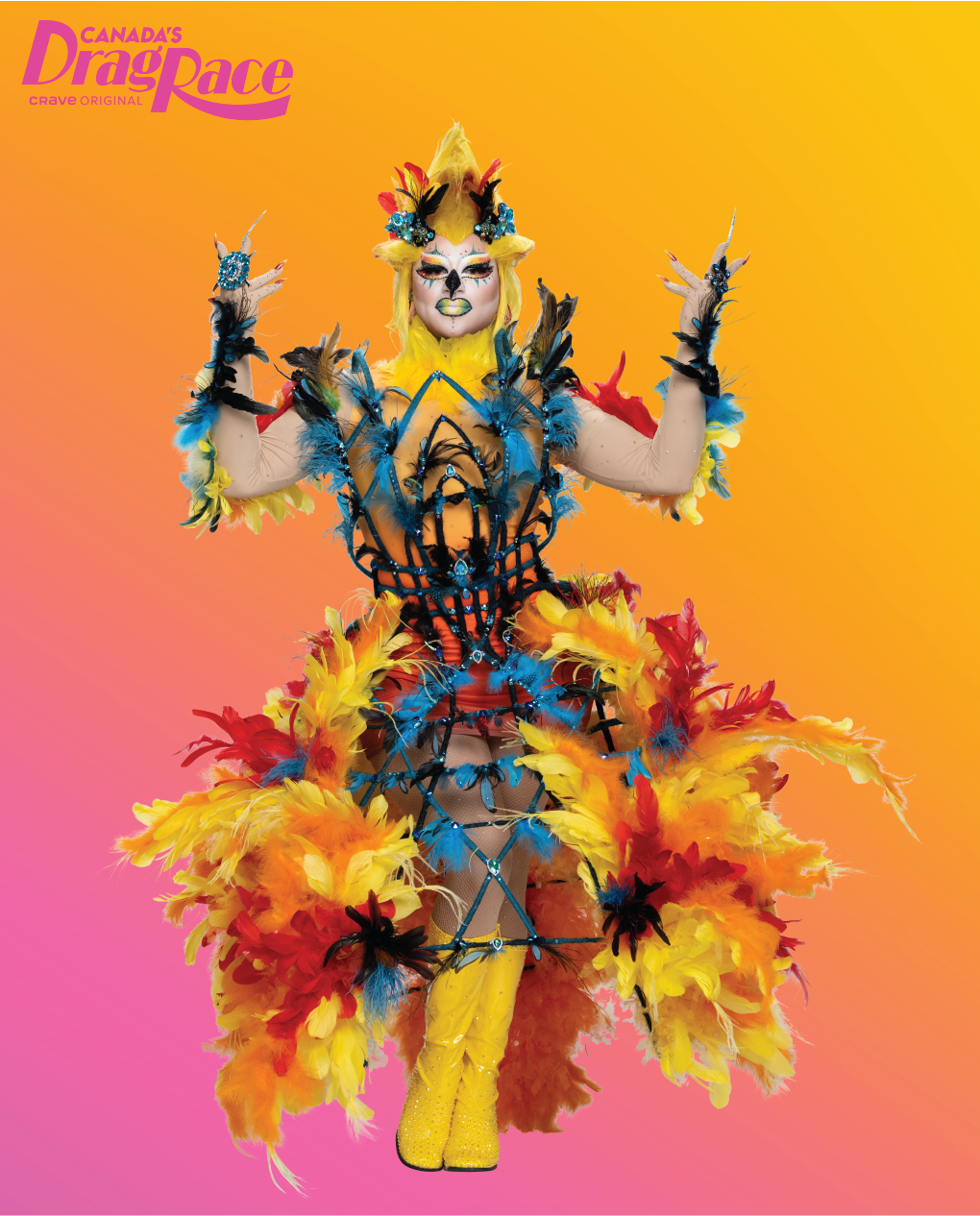 Check her out on: TikTok at @missfiercalicious

This self-described “bitch with a heart” was one of three artists to be included in Cosmopolitan’s Cosmo Queen Series. As if that wasn’t enough, she was featured in a Lights music video and went viral on TikTok–so much so that the social platform decided to use her in their marketing campaign. Yas, queen! Originally a Biology major at Western University, her life changed when she discovered her passion for drag. Working with an abundance of sassy confidence, Miss Fiercalicious is sure to be a CDR crowd pleaser! 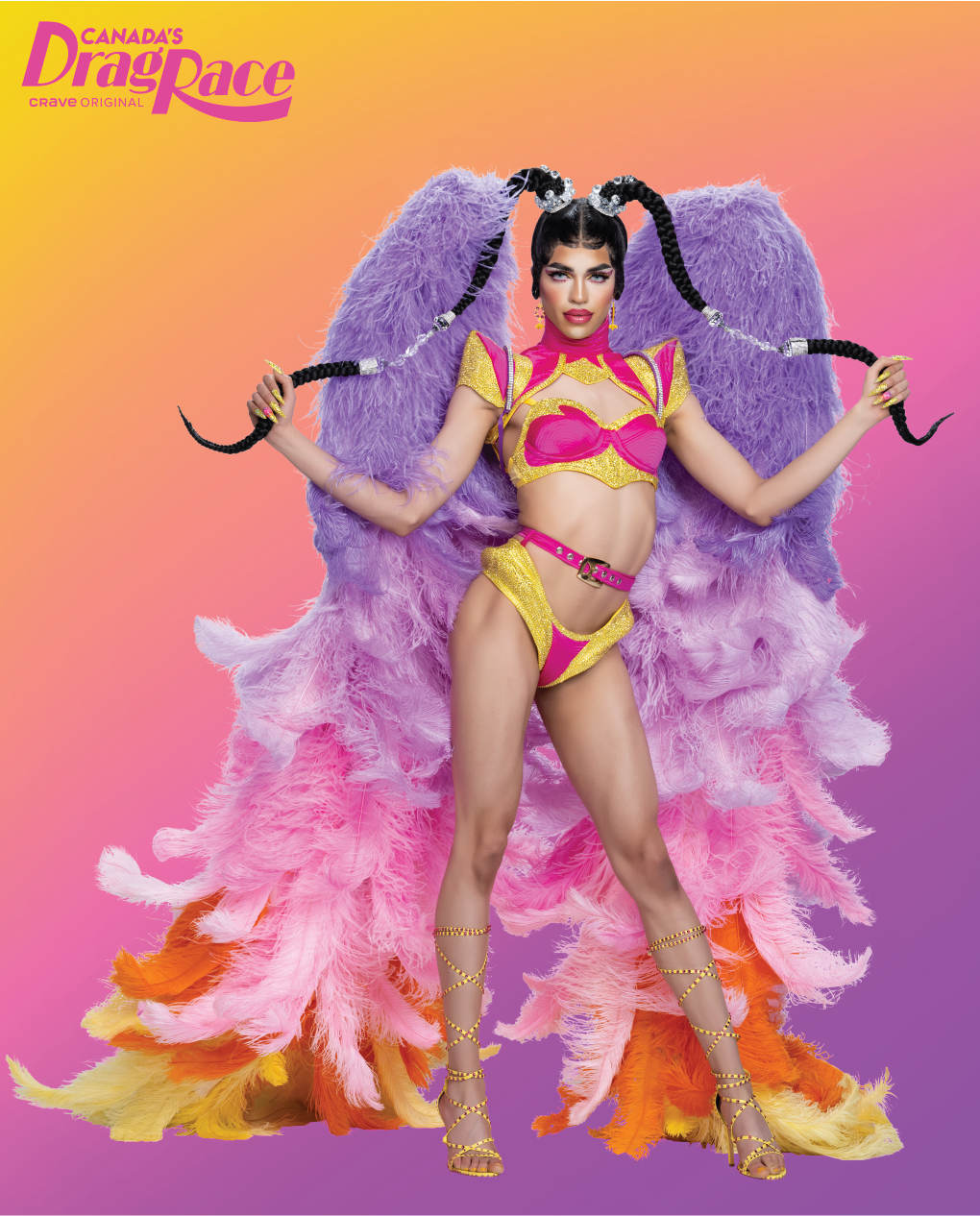 Intrigued by drag even before Halal knew what it was, it wasn’t until moving to Canada at 16 that she discovered where she truly belonged. The rest is herstory! They're always looking for ways to encourage new and BIPOC queens and "queerdos" in need of a support system and they organizes weekly CDR viewings to help prop them up–she calls them The Bae Watch! Eager to defy expectations and engage in difficult conversations, Halal is out to show that you can be a proud Muslim and proud queer drag queen.

"Halal is outspoken, she is in your face, she has a voice and always uses it." 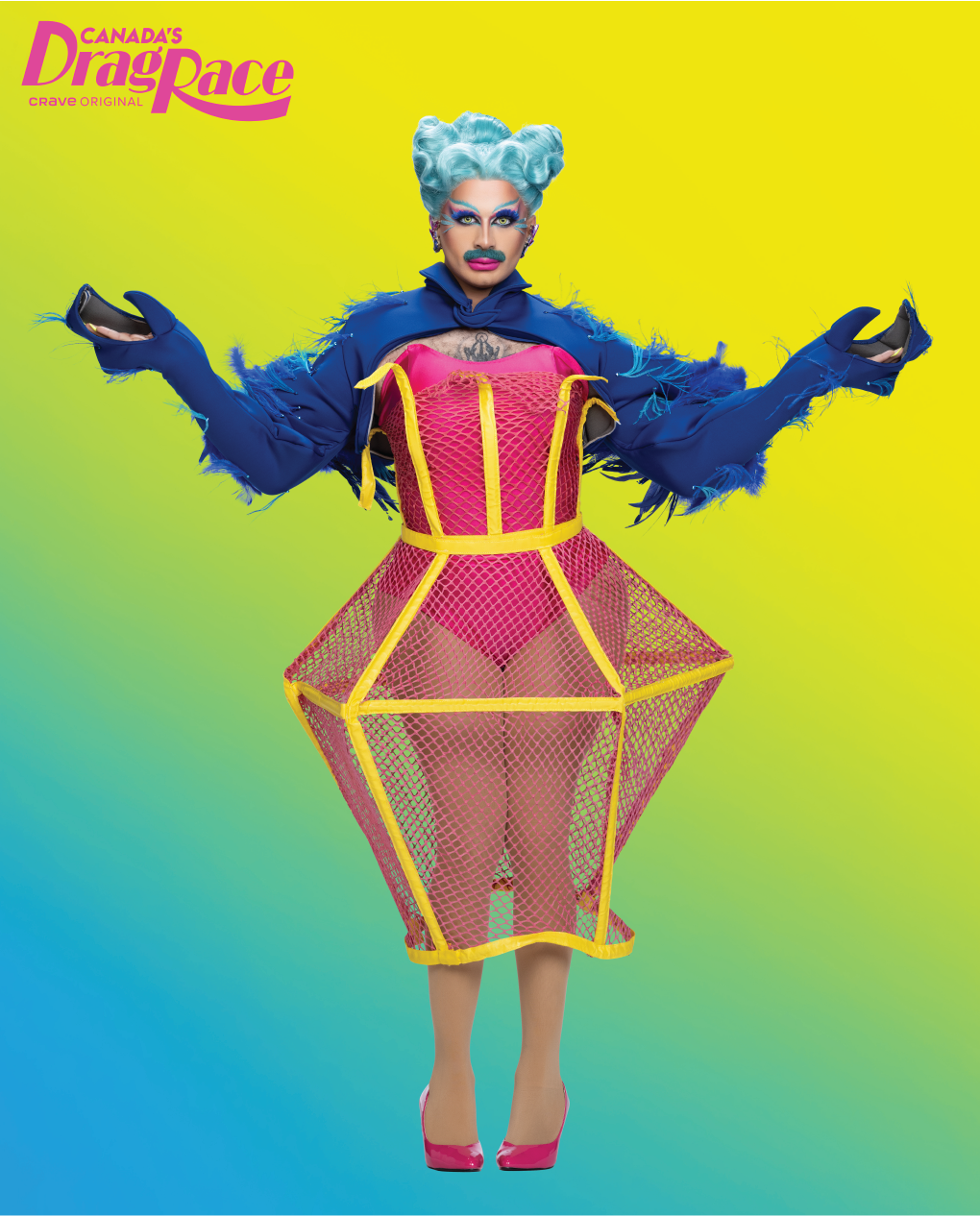 A young queen with big dreams, Kimmy Couture moved to Canada when she was 17 and has become a dance and design icon in her new home. Far from being new to the scene, she won their first-ever drag pageant in the Philippines along with titles like Miss Southern Leyte in 2011 and Miss Gay Cebu in 2012 before immigrating to Canada. More recently she took home the Miss Capital Pride title in 2018. And guess what? Her drag mother is none other than Icesis Couture, last year’s CDR winner!

"I want to make sure I inspire immigrants who started from nothing to become something and somebody! The first Southeast Asian to win Canada's Drag Race!"

Meet Jada Shada! Not only has she been given the name of “Toronto’s Turnup Queen”, but she also performed the pre-show for Lizzo’s Toronto tour stop. Yes, THAT Lizzo! She started out as a male resort entertainer and didn’t try drag until coming to Canada as a refugee in 2009. She placed second in her first competition and hasn’t looked back. A true performer, she’s ready to set this year’s drag stage on fire!

"I hope you're ready for the Jada Shada experience! She’s an icon. Period." 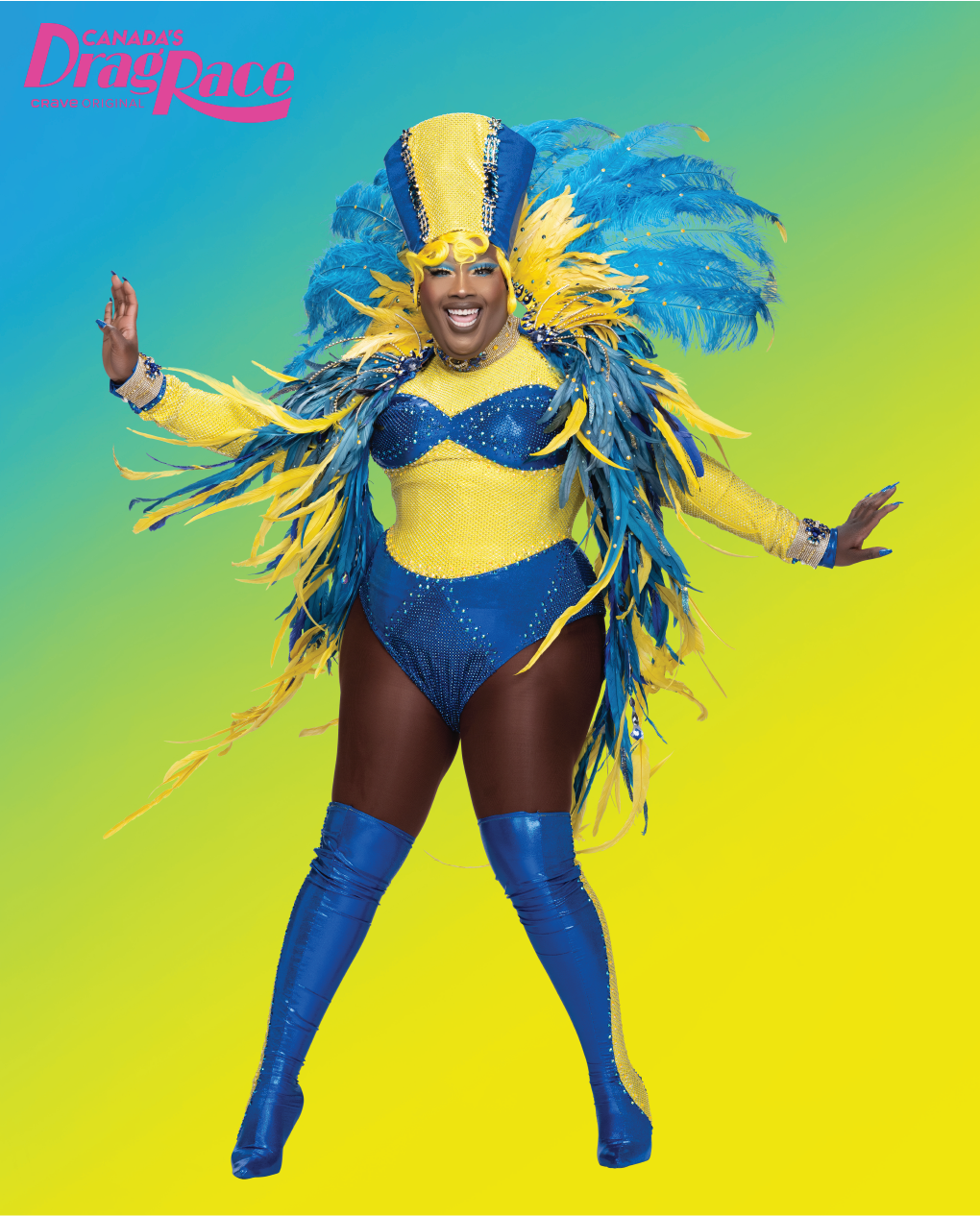 Make way for Lady Boom Boom! The petite powerhouse loves everything fashion, design and sewing and even has a professional degree in Clothing Conception and Production. At just 5’1”, she started out as a bartender but is now a House Queen at Le Drague, hosting and performing every week. She loves connecting with the crowd and charming them with her dynamic designs and sexy, outrageous performances. One time, she even got tatted ON STAGE to honour her grandmother. Boom Boom, indeed!

“Lady Boom Boom is the extension of my extravaganza. When you have too much style for one gender, you do drag - doing drag is the reason I'm on this planet.” 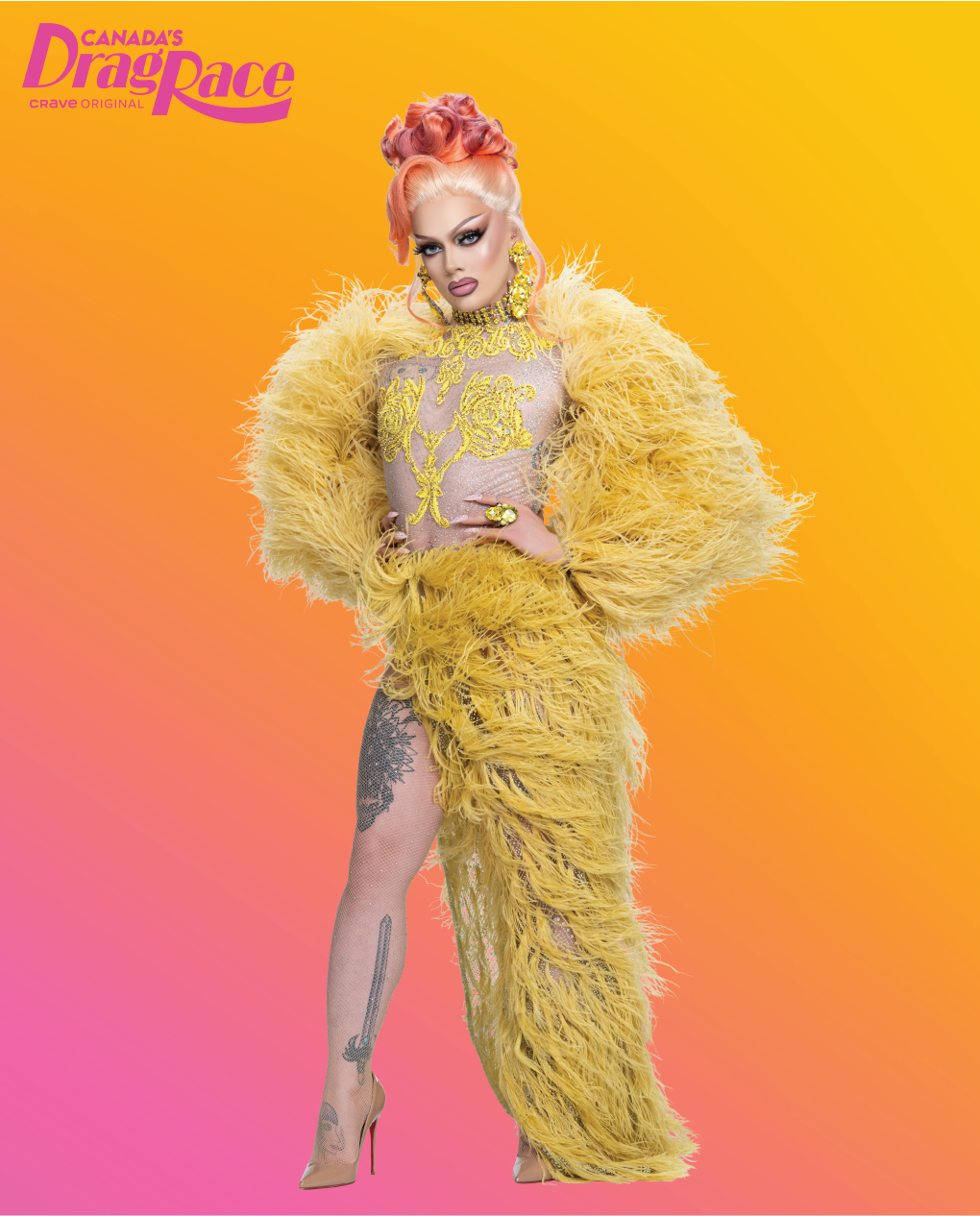 Pronouns In Drag: They/Them or She/Her

Check them out on: TikTok at @chelazonleroux

Shantay this way, Chelazon! This queen is a thriving drag performer and proud of her Indigenous roots. She recently walked the runway at London’s Fall Fashion Week for Indigenous designer Jill Setah’s collection, representing Missing and Murdered Indigenous Women. A comedian by day, Chelazon is quickly gaining popularity across social media, amassing more than 460,000 followers on TikTok alone! They believe in the power of drag and can’t wait to bring their passion to CDR!

"Chelazon Leroux is the moment. Unapologetically Indigenous and will give you everything you didn’t know you wanted or needed!” 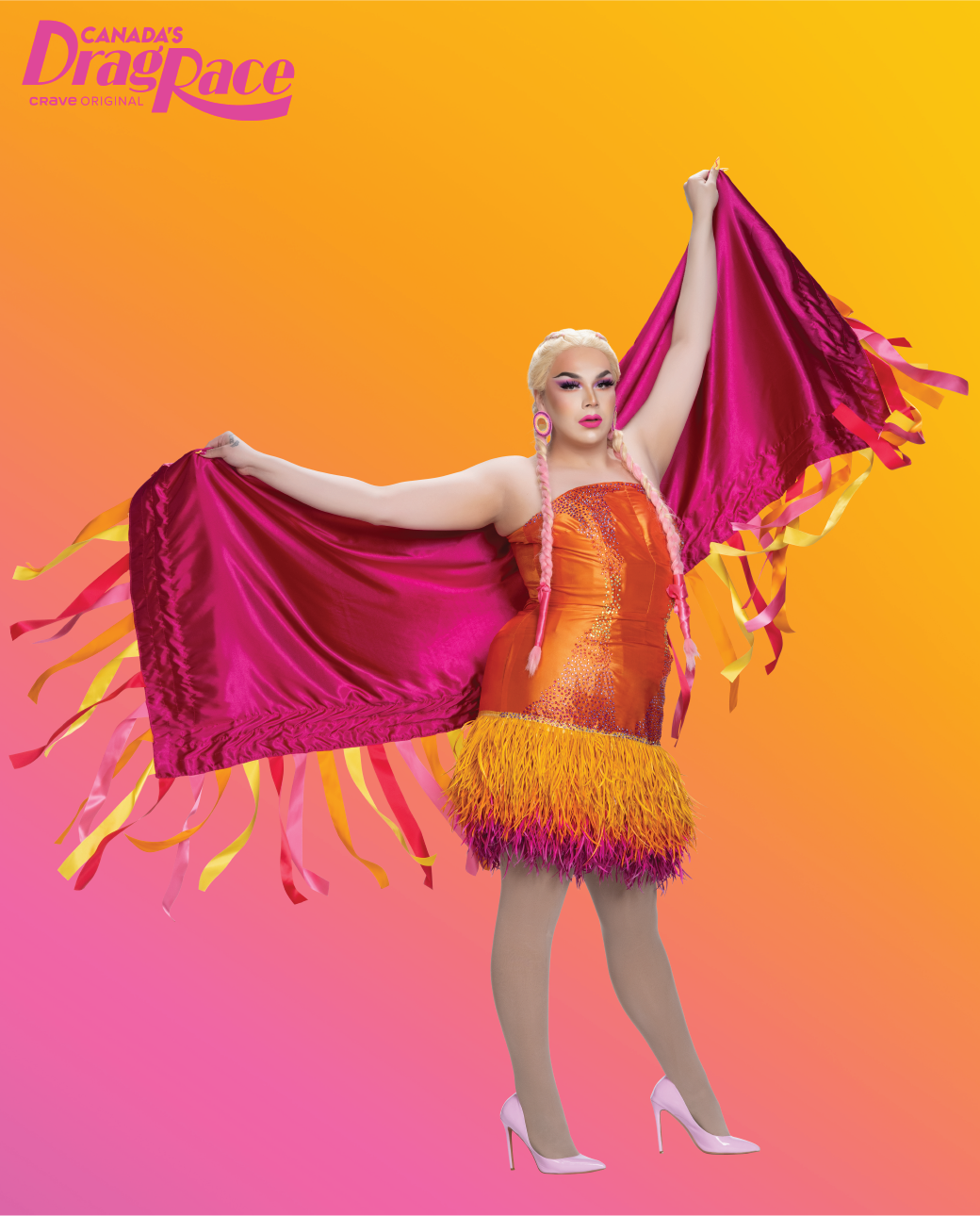 Then there’s Gisèle. She has made a name for herself in the Montreal scene and headlines at the Cabaret Mado every week as one of its resident queens. A sure sign of that cultivated Quebecois star power? She’s shared the stage with Quebec’s pop star and sweetheart Marie-Mai! Gisèle also adds her own personal polish to her act—designing, sewing and styling everything she wears. Loud and talkative on and off stage, this particular queen is guaranteed personality plus!

“I will bring you joy, delight and a lot of funny moments, and obviously my beautiful drag.” 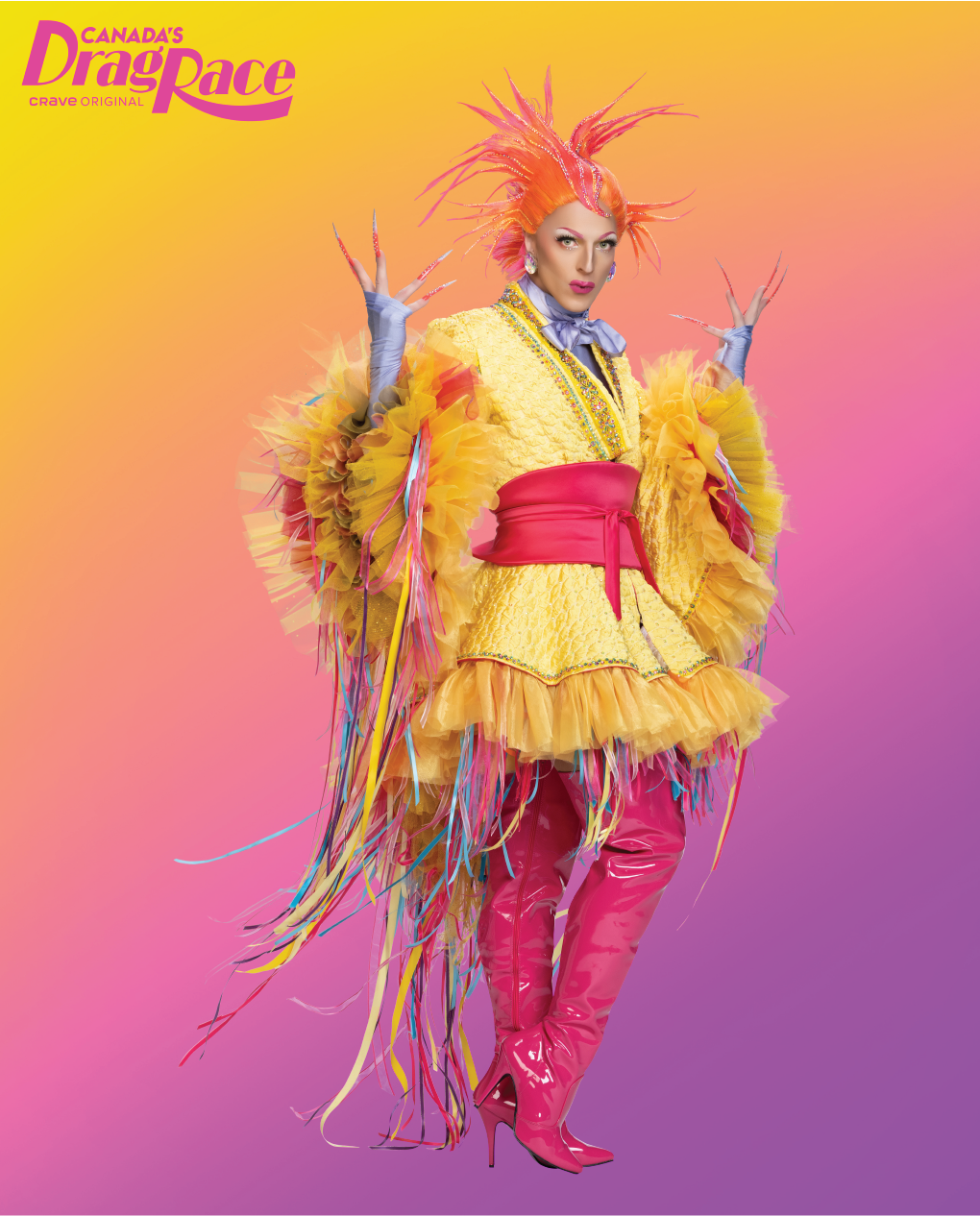 Meet Miss Moço. Even through personal trials and tribulations, like the breakup of her marriage in 2020, this queen has maintained an enviable elegance. She started her own pageant in Lisboa, Portugal in 2017 and has become famous on this side of the Atlantic for her legendary wig snatch and Soho drag brunches. Pass the mimosa, gurl! Don’t mind if we do.

“I feel like a brand new bitch these days!”

An established force to be reckoned with, this queen is already making history as the first East Coast contestant on Canada’s Drag Race! She’s previously won the Atlantic Drag Star title and has produced and hosted her own show with her house of six non-binary drag daughters–all of whom were featured in a nationally broadcast tourism ad. Her day job finds her building props for television shows and styling hair for musical productions but drag is where she’s at her most confident. Bring It, Ms. Gerd!

“I've made a name for myself in Newfoundland, and I've been around long enough that I'm not compared to people - people are compared to me.” 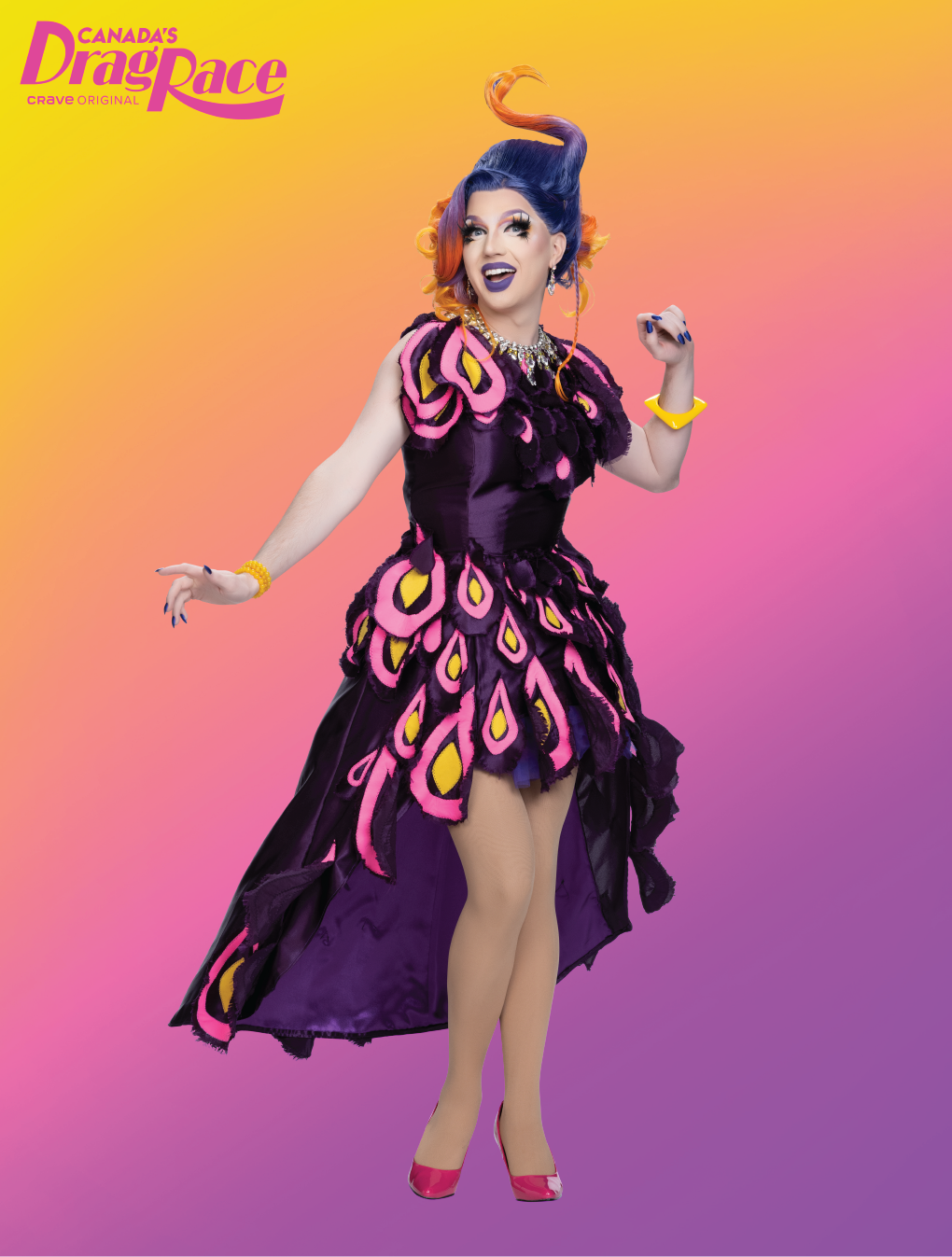 Then there’s Vivian Vanderpiss. A two-time winner of the Fox Drag Competition, she’s also won the Timothy Hung MakeUp Contest and been named by CBC as having one of the 13 Top Instagram accounts. Vivian creates 100% of her eye-catching looks, even styling wigs for both herself and other drag artists including JIMBO. The real drag deal, this queen is ready to shake up CDR with her glampy art and vivacious charm.

"Costume, Makeup and Hair... really the whole look. I love to walk out on stage and make the people gasp!"