If you liked ‘Mare of Easttown,’ ‘American Rust’ is your next TV obsession

But you know, without those signature accents.
by Amber Dowling
Showtime

When Mare of Easttown (stream now on Crave) debuted in April, Kate Winslet headed up a heartbreaking (and honestly kind of shocking) seven-part miniseries that had everyone talking. After all, the show had everything: a gripping mystery, surprising twists, and a super interesting backstory in leading lady Mare. Oh, and you know, those accents.

We’ve definitely missed the show, and while we wait to see how many awards it will probably wrack up at this month’s Emmys, this week there’s a new limited series that may become our next TV obsession. American Rust is a complex family drama and murder mystery starring Jeff Daniels and Maura Tierney, and is based in a fictional small town in Pennsylvania. You can stream the first episode on Crave now with new episodes dropping every Sunday.

We had a chance to check out the series in advance, and if Mare of Easttown was one of your favourite shows of 2021, we’ve got a few reasons why you’ll also love American Rust, which is based on the award-winning novel of the same name by Philipp Meyer.

There’s another heartbreaking case to solve

The action in American Rust essentially picks up when a small Rust Belt town (a.k.a. a formerly powerful industrial sector city that is now in economic decline and decay) is rocked by the mysterious death of a former police officer. Of course, there are also themes of drug use, social and political issues, and a sense of community. Sounds an awful lot like a place called Easttown, no?

In Rust, Daniels plays lead police chief Del Harris, the guy who is tasked with solving the crime. However, he also has conflicting loyalties, since the person accused of murder also happens to be the son of the woman he’s seeing, a seamstress named Grace (Maura Tierney).

It’s got that small-town vibe

It didn’t take long for us to become obsessed with the characters in Mare of Easttown, and Daniels is hoping viewers feel the same about those featured in Rust. The series has lots of the same stories of bad marriages and troubled children, not to mention an overall stressed-out-but-tired vibe. However, there is also more than meets the eye, and that’s what really spoke to Daniels, who was raised in Chelsea, Michigan.

“I grew up working class. I worked at my dad's lumber company. I drove a truck during the summers. I unloaded stuff. That's what I did,” Daniels revealed during the summer Television Critics Association (TCA) press tour.

The fact that Winslet headed up a TV show was kind of a big deal, given her Oscar clout and all. Add in Jean Smart, Guy Pearce, and Evan Peters, and it was an all-star cast.

American Rust has that same star-studded vibe thanks to Emmy-winner Daniels, Emmy-nominee Tierney, and other great actors like Bill Camp and Mark Pellegrino.

“[TV] is the Wild West, and it's led by the writers,” Daniels said of all these notable actors turning to TV now. “And I couldn't be happier, because it has kept me in this business, being able to challenge myself like I've been able to from The Newsroom on.” (Stream all three seasons of The Newsroom anytime on Crave.)

There are lots of flannel shirts

If you loved Winslet’s realistic fashion sense on Mare, some of the early stills for American Rust promise that we can expect the same glorious level of flannel shirts, knitted sweaters, and smart flat shoes from this new series as well. We’re just saying. Now if only we could say the same about the accents, which definitely aren’t as defined on Rust as they were on Mare. 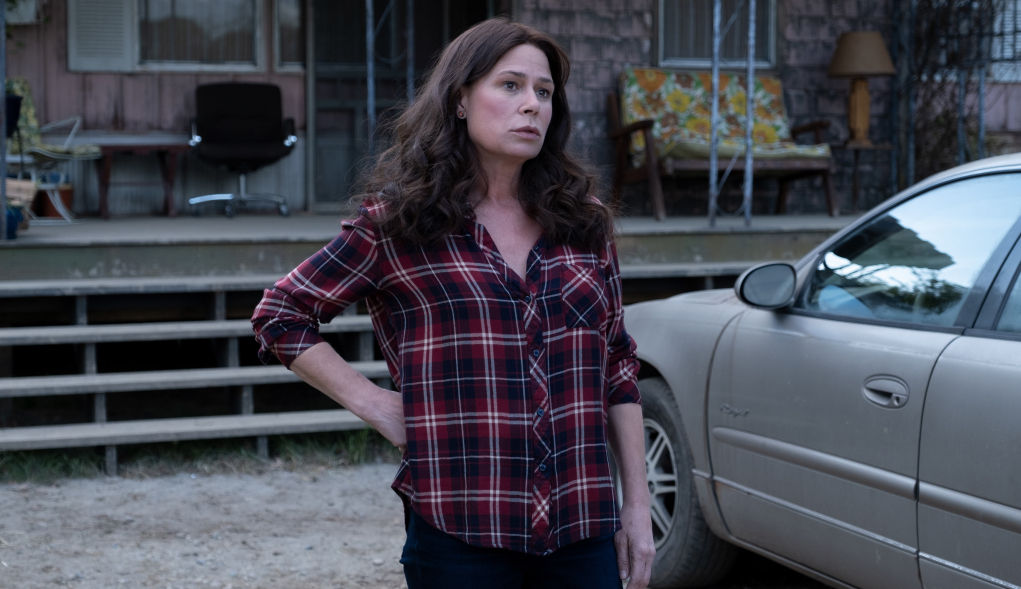 Expect lots of twists and turns

Like with Mare, not all is as it seems in American Rust. So if you love dissecting all the clues and trying to figure out whodunnit, this is your big chance. And, once you do figure out who the “bad guy” at the centre of this whole thing is, the odds are pretty good that you’re not going to know how to feel about the big reveal. Because sometimes things aren’t as black and white as other crime stories would have you believe, and tragedy is often two-fold.

“A lot of what we're going for in this is real people, their good and their bad, their strong and their weak,” Daniels added. “Just like people in real life. This is less of a Hollywood-polished version of southwest Pennsylvania and more of this cast trying to blend in and become one of them,” he continued.

“Del’s still got to be a cop regardless of what he's going through personally. And he tries his best. Which is a lot of what this show is: good people having to make bad choices in order to survive.”

The first episode of America Rust is available stream now on Crave with new episodes dropping Sundays. Crave is also where you can now stream the full season of Mare of Easttown.

BEFORE YOU GO: Demi Lovato is ‘experiencing’ UFOs for new series