Power couple Jhené Aiko and Big Sean released their new music video for their most recent collab “Body Language,” and it is full of nods to some of our favourite ’90s movies. The music video takes inspiration from classic films like Poetic Justice, Love Jones and Waiting To Exhale, to name a few.

The video starts with a nod to Poetic Justice, starring Tupac and Janet Jackson. Sean plays the part of Tupac’s Lucky, a postal clerk who comes into Justice’s (a.k.a Jhené) hair salon while she’s working and begins flirting with her. All the feels! Jhené is wearing the same hat and box braids that Jackson had as Justice in 1993.

Sean and Jhené take off in the postal van together, and that’s when the “Triggered” singer has an Angela Bassett moment from Waiting To Exhale when Bernadine finds out her husband is leaving her after 11 years of marriage.  During an argument with Sean, she envisions herself walking away from a burning car just like Bernadine.

We almost forgot that Ty Dolla $ign was part of the song until he briefly appears in a blue-lit room for all of 30 seconds. The music video cuts back to Jhené and Sean in their Love Jones moment. The scene plays out just like the confessional cheese omelette whipped up for Nina Mosley (Nia Long) by Darius Lovehall (Larenz Tate). Except in Jhené’s case, it’s probably a delicious vegan substitute. In another nod to Love Jones, Jhené is in a taxi with her friend, and she recites the same lines as Nina, “It was like his d–k just talked to me,” she said. “What’d he say?” her friend asked. “Just Jhené, ouuuweeeeee,” she said.

jhené + big sean sending a nod to love jones is everything > pic.twitter.com/WBHmt92NrE

The movie also features the iconic scene from the 1999 movie, Best Man. Of course, it was the bachelor party moment when they introduced Candy (Regina Hall), who danced to Cameo’s “Candy.” We wished there was an electric slide scene, but we can’t be too greedy because this music video is full of hidden gems.

The sexy collab is from Sean’s Detroit 2, and the couple turned up the heat with their steamy performance earlier this year at the 2020 BET Hip Hop Awards.

Fans of the couple took to Twitter to celebrate the video and all of its rom-com moments.

Get you a girl that looks at you the way Jhene looks Big Sean. pic.twitter.com/WVFo7zMe31

If you try to keep up with the timeline of the Chilombo artist and Big Sean, you’ll get a headache. They went on their first date while she still had a boyfriend in May 2012. He took her to a Lakers game, and she said that he knew she was dating someone else. They released an album together, Twenty88, in March 2016 and by April, they were dropping the L word but claimed it was in a friendly way. “Jhené is more than just a friend,” Sean said at the time. “I don’t know how else to describe it — me and her are just cool like that. I love her and I know she loves me.”

By June 2016, the pair kissed onstage, and it was a wrap. She separated from her husband of 11 months, Dot Da Genius, and we could finally stan the couple we’ve been rooting for. It wasn’t until September 2017 when it became obvious to everyone that they were dating, and she tatted him on the back of her arm after the divorce was finalized in October 2017. The couple has been on and off since December 2018, but it is clear they are back and stronger than ever.

Big Sean and Jhené really ate it up and left no crumbs with that “Body Language” video. 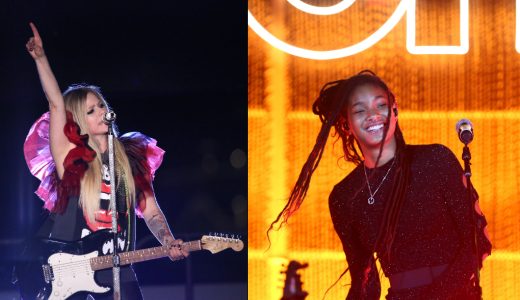