Yup, there’s a reason Streep had those Armani suits and Chalamet rocked a mullet.
by Amber Dowling
Netflix

Most of us have heard of method acting (a.k.a. when an actor refuses to break character during filming), but have you ever heard of method costume designing? That’s what Don’t Look Up’s costume designer, Susan Matheson, considers herself to be. And if you’ve caught the star-studded film since its December 24 release on Netflix, you may agree that her methods paid off.

In an interview with GQ magazine, Matheson explains that she asked all of the actors—Timothée Chalamet, Jennifer Lawrence, Leonardo DiCaprio, Jonah Hill and even Meryl Streep—to come to their costume fittings in character. That helped her achieve what director Adam McKay called “gritty realism,” especially when it came to outfitting so many different characters.

Let’s have a look, shall we? 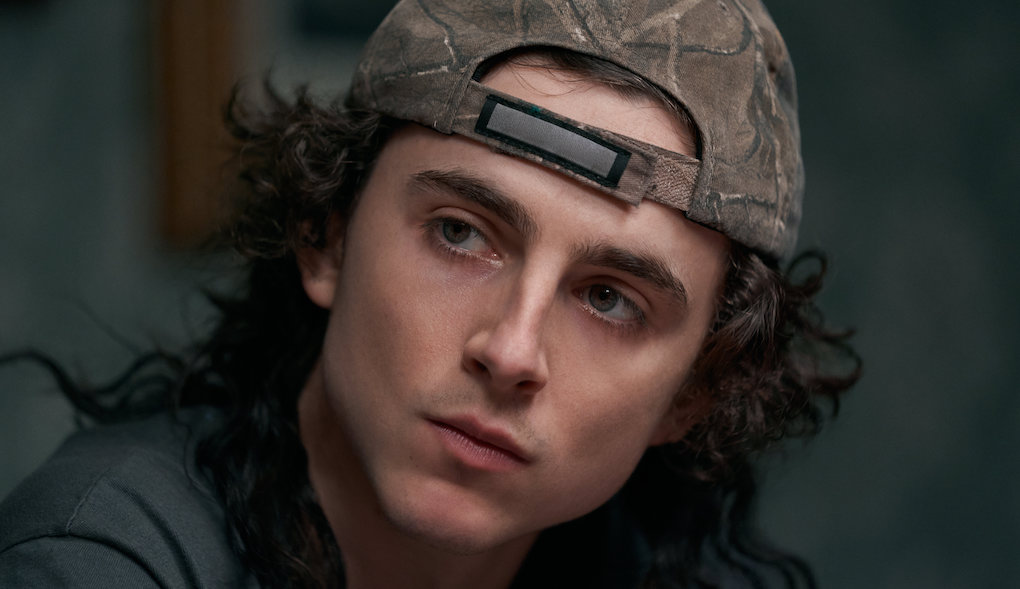 It turns out we’re not the only ones obsessed with Chalamet—Matheson reveals she had the greatest fittings of her life with the star. To achieve Yule’s look, she dug through bins and bins at thrift stores to find threads that would bring the “evangelical shoplifting skater punk” to life.

She also sewed a Christian camp patch onto his puffer jacket, invented a band called Noah’s Flood and had a friend create fake merch to reference the apocalypse, and found a motocross tee from Du Quoin, Illinois after McKay revealed that’s where Yule is from.

“The thing that he was most obsessed with was having some kind of a mullet,” Matheson adds. “He said to me that he never, ever wants to look the same twice in a movie.”

If you’ve seen the flick, you’ve probably noticed that Chalamet doesn’t always wash that hair and that he covers it with a camo ball cap. That hair obsession goes way, way back, and fans have always been into it. And yes, that means they’ve even gone on the journey with him during his 2019, Henry V bowl-cut phase. 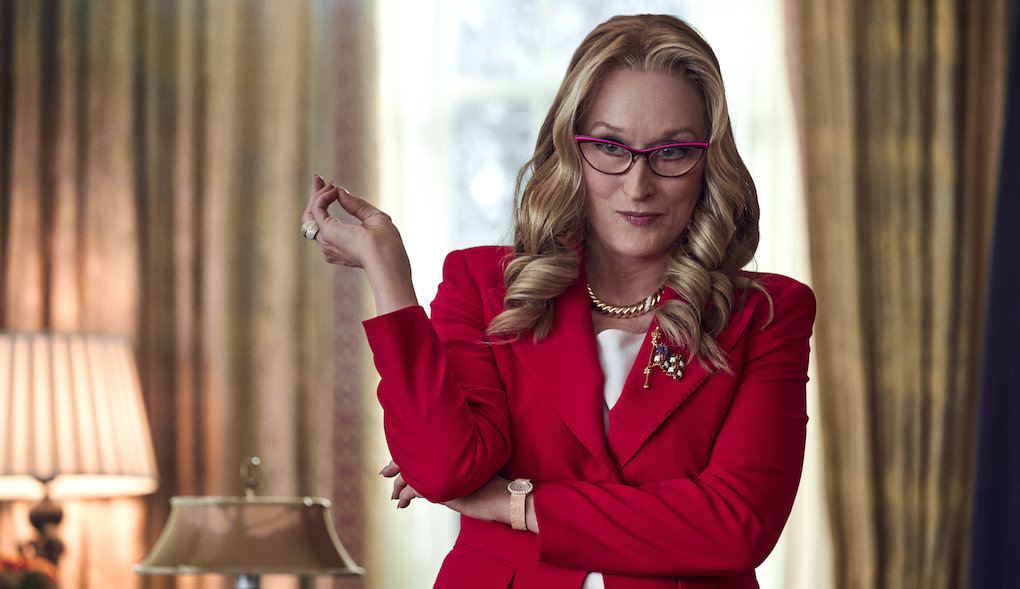 How do you go about outfitting a fictional female president of the United States? With statement power suits, of course. But there’s more to the prez’s penchant for red than meets the eye. According to Matheson, the red was inspired by McKay’s note that the character was taking viewers on a journey through Hades, a.k.a. the underworld.

Streep’s wardrobe was also accentuated with pops of blue (because Orlean is super-patriotic), and her clothes were made by Armani (because, money). As for her watch? There’s a pretty specific tie-in there, too.

“She wears a Piaget. I know this is hard to believe, but this is really the name of the watch: it's an Extremely Lady watch. Piaget re-released their Extremely Lady watch from the 1960s, and this is the watch that Jackie Kennedy wore in the White House,” reveals Matheson.

To this day McKay won’t reveal whether Streep is supposed to be a Democrat or a Republican, but not even all of the specific costume choices could help her get back into the swing of things following the lockdown.

"I found it really hard," Streep tells EW. "When I would come in to shoot my stuff, [I'd] get out of the car and hadn't spoken to anybody in three weeks. [I'd] walk into the stadium in Worcester, put on the wig and the nails and the suit, and make a speech to all these people." 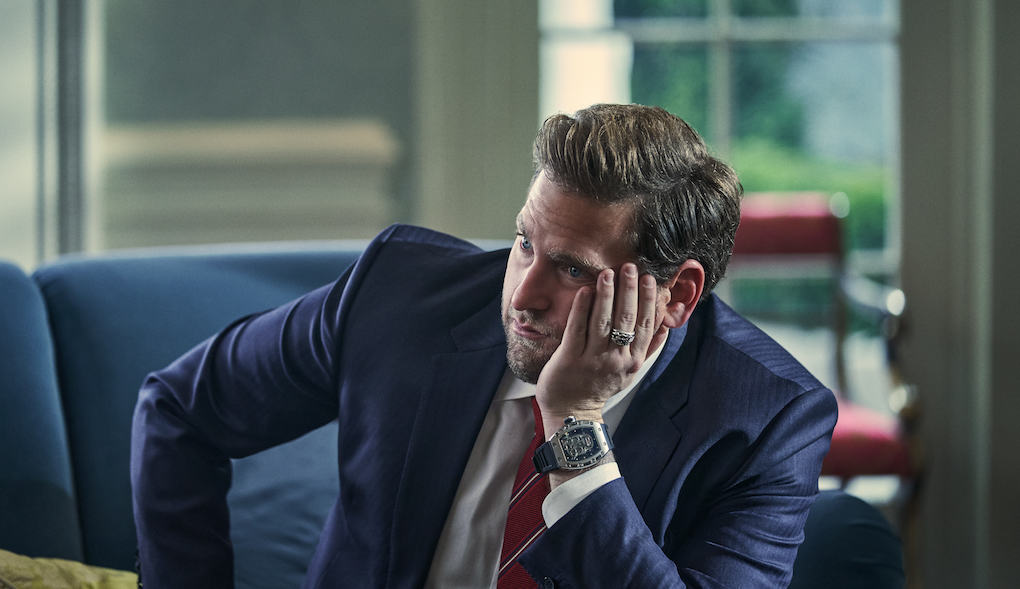 McKay might not want to reveal who inspired the film’s president, but Jonah Hill, who plays President Orlean’s son, had some ideas. In an interview with Esquire he reveals that he looked to the Trumps for inspiration. He also decided that as the First Son (and Chief of Staff), he would constantly carry around a Birkin bag.

“Since I was a son and I worshiped my mother, the first thing I said to Susan Matheson, the costume designer, was ‘I want to have a Birkin bag,’” Hill explains. “Because he worships the feminine, right? His idol is the feminine.”

In the GQ article, Matheson concurs with many fans out there who believe Hill is a “style maven,” and reveals that for the film they both agreed the superficial character needed to be obsessed with logos. “So he's wearing Ferragamo: the Gancini buckle logo shoes and the Gancini buckle logo belt. We had to add an element of obsessive designer logo tackiness. And his ties, he wears some Hermès, some Zegna, some Armani,” she explains.

As for the character’s watch, which was a replica Richard Mille? Fans immediately spotted that it was a fake, but there was a good reason for that. “It's not a problem getting one of those [watches]. The problem is if the watch should get stolen while we're shooting. I think those watches are worth north of $600,000,” she adds.

For those who haven’t noticed, that why the Birkin is also a fake—a $38US Amazon product, to be exact. 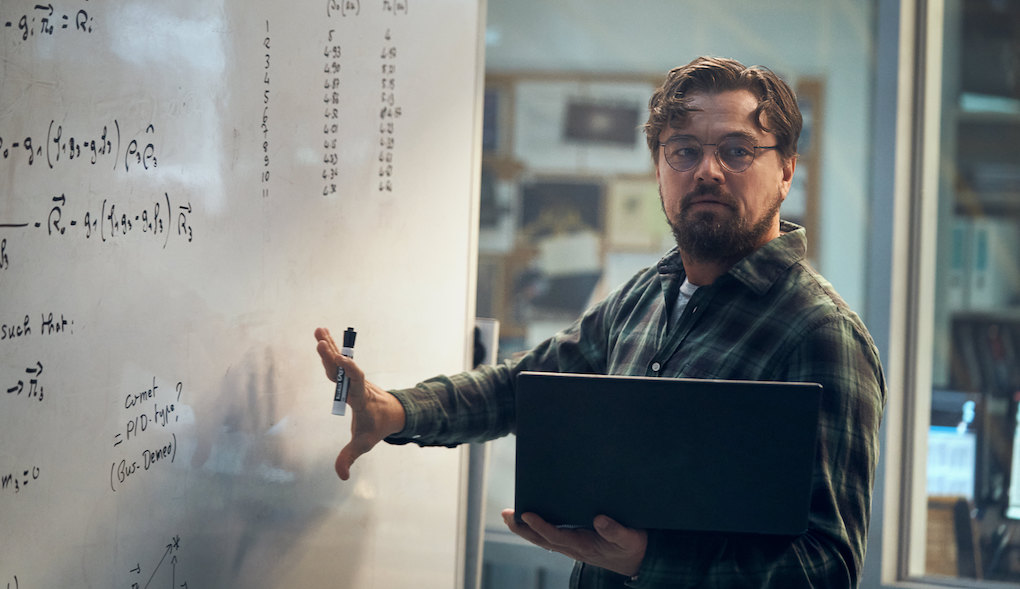 Matheson reveals to GQ that she was able to expand on Leo’s wardrobe the most in Don’t Look Up. That’s because while he starts off as a professor who wears purely vintage clothing and doesn’t care much about his wardrobe, he eventually becomes a spokesperson for the White House during this giant crisis.

“So Leo eventually starts to change. They first start by shaving his beard a bit, then he starts to wear Canali and Brunello Cucinelli suits,” Matheson says. “He even then wears a Valentino tuxedo. Then he realizes that he needs to go back home and that's when he starts to wear his old clothes again.”

Like Leo, J-Law’s character Kate also goes through a style transformation in the film. While she starts off in clothing inspired by typical students, she begins dressing to impress the more that she’s in the public eye. Then, as she gets shunned by the public and returns home, her wardrobe becomes infused with more goth elements.

“She really starts to wear things that look like they’re from a thrift store that take her completely away from the world of the White House,” explains Matheson. (Who did not take the opportunity to address Lawrence’s epic bangs.)

Lawrence has also spoken about that look, revealing to Vanity Fair that after speaking with a female astronomer, she wanted Kate to be more in-your-face. “Kate is the type to be fierce and 'notice me, hear me roar, rat-tat-tat' kind of lady,” she says.

Kid Cudi as as DJ Chello 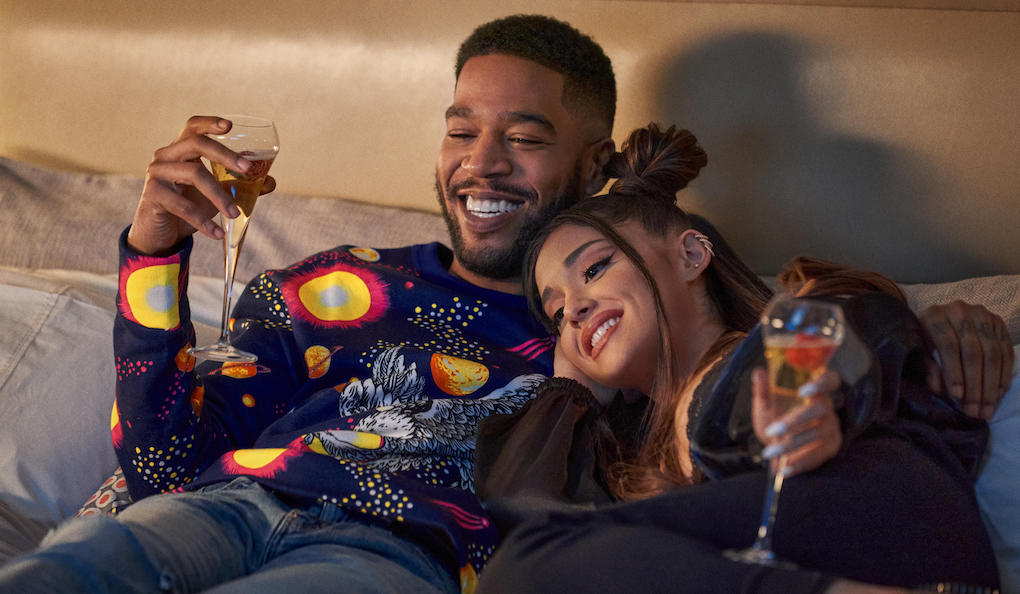 When it came to outfitting Kid Cudi, Matheson says she had a sweet gig. The rapper makes an appearance alongside Ariana Grande as performers who collaborate on the love-ditty turned comet-welcoming song “Just Look Up.” As such, Matheson wanted him to wear a posh piece from Giorgio Armani’s ski line that she says came directly from a photoshoot in the mountains.

“Because I was desperate to get it right away, it arrived with alpine dirt still on the boots [from the photoshoot],” Matheson adds. “If I took a sample to a lab, I would have been able to tell which mountain range they'd been shooting in.”

Don’t Look Up is available to stream now on Netflix.

BEFORE YOU GO: Ben Affleck reveals what his daughter said after reading 'The Tender Bar' script