Everything we know about the Avatar sequels

After debuting at CinemaCon in Las Vegas, and then being viewable exclusively in theatres before Doctor Strange in the Multiverse of Madness, the trailer for the sequel to 2009’s Avatar is finally available on YouTube, and hoo-boy is it ever a feast for the eyes.

The Na’vi and Pandora are back in Avatar: The Way of Water, and with it are hero Jake (Sam Worthington) and his love Neytiri (Zoe Saldana).

The teaser trailer is short, and clocks in at just over one minute and thirty seconds, but we are treated to lush, sumptuous glimpses of Pandora underwater. In fact, in one shot, it looks like Jake even swims side-by-side with what seems to be a Na’vi whale, hand to fin!

Of course, it wouldn’t be a James Cameron film if there weren’t copious amounts of deathly peril and war. We also see glimpses of the human avatars who are once again trying to invade Pandora with their weapons and lust for unobtanium.

But things have changed in the 13 years since Avatar first graced our screens and became the top-grossing film of all-time at the worldwide box office with $2.84 billion.

Now Jake and Neytiri have children and seeing as how Jake was born human, one of their children appears to have trouble breathing in Pandora’s atmosphere, which is understood to be toxic to humans, requiring him to wear a breathing device on his face.

In the trailer voice-over, we hear Jake say, “I know one thing: wherever we go, this family is our fortress.”

So is The Way of Water a treatise on family and homeland? Here’s everything we know about the sequel, and the subsequent series of films that have also been announced.

We learned a couple years ago that Sam Worthington and Zoe Saldana, who played Jake and Neytiri in the 2009 original, were returning for the sequel. We’ve also learned since then that costars Dileep Rao, Joel David Moore and CCH Pounder will all reprise their roles. Surprisingly, Sigourney Weaver, Stephen Lang and Matt Gerald, whose characters died in the 2009 original, are also all returning! We’re dying to find out how James Cameron explains this! 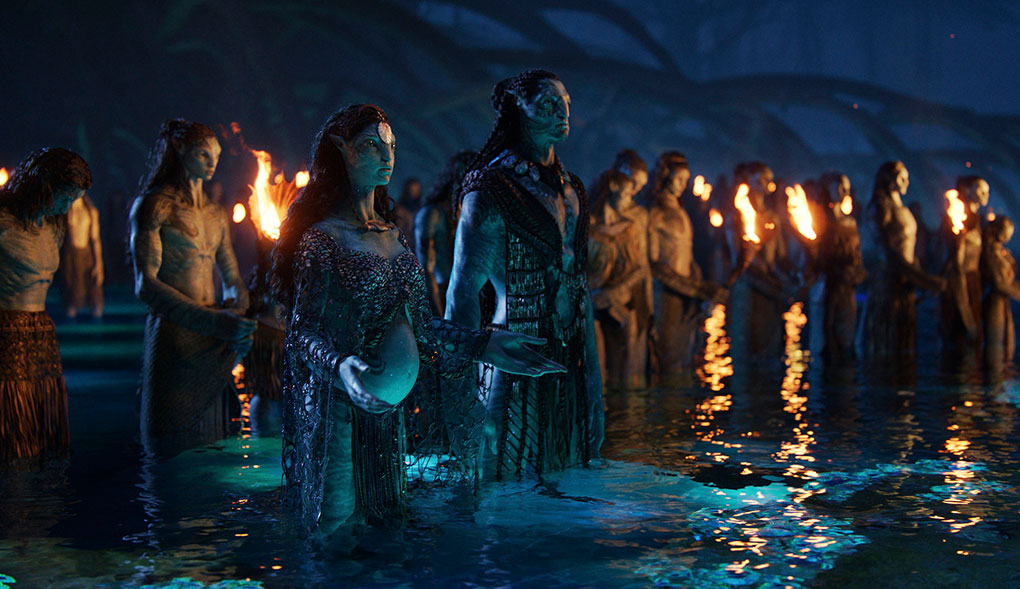 There are new and exciting additions to the cast

We also learned in 2020 that James Cameron’s Titanic heroine, Kate Winslet, broke her vow of never working with the director again, and signed on to join the cast of The Way of Water. Michelle Yeoh is also a new addition. Edie Falco and Jemaine Clement are also joining the cast, playing humans intent on studying the Na'vi.

Most of the sequel will take place underwater

The underwater world of Pandora will introduce to us a new community of Na'vi called the Metkayina, who live in the reefs alongside the beaches and shores of Pandora. James Cameron told Entertainment Weekly back in December that most of the filming took place in a 900,000-gallon tank built specifically for the sequels, "My colleagues within the production really lobbied heavily for us to do it 'dry for wet,' hanging people on wires," he told the outlet.

He also revealed that the cast had to become certified scuba divers, and all of them worked with professionals to learn to free dive and hold their breath for minutes at a time. 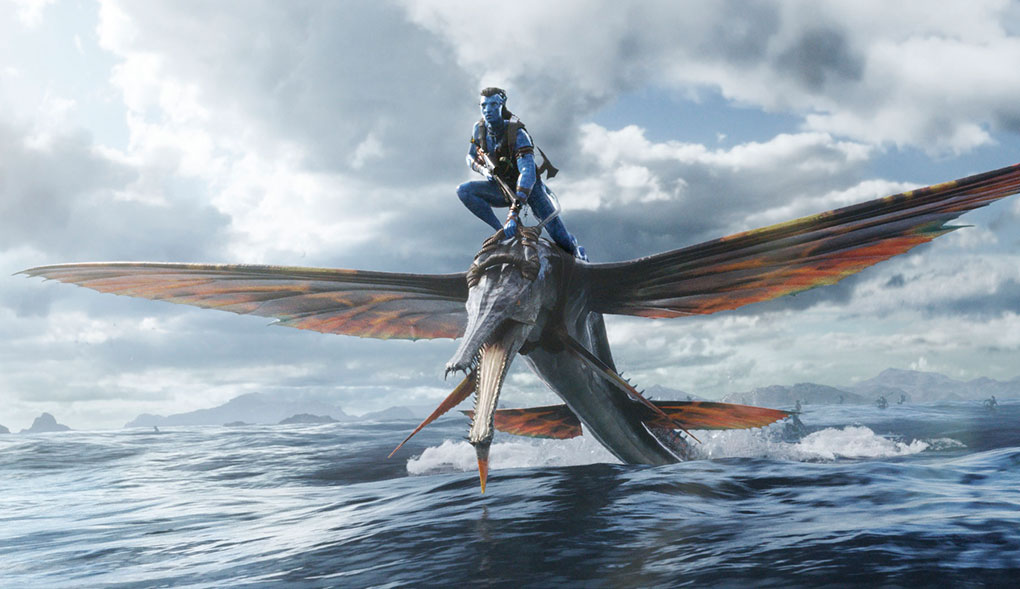 There was so much underwater filming, Kate Winslet actually broke an official world record

Kate Winslet revealed in 2020 that she had broken the record for holding her breath underwater while filming The Way of Water. She held her breath for seven minutes and 14 seconds, breaking Tom Cruise’s previous 2011 record 6 ½ minutes during the filming of Mission: Impossible – Rogue Nation.

The plot will focus on Jake and Neytiri’s family

As we see in the teaser, Jake and Neytiri now have a family. The films will show they have three of their own children, played by Jamie Flatters, Britain Dalton and Trinity Bliss, and they’ve also adopted a human played by Jack Champion.

We know when to expect the sequels now too

Mark your calendars, because Avatar: The Way of Water hits theatres on December 16th. But we also know more about when to expect Avatar 3, 4 and yes, 5! According to reports, a sequel will drop every two years, meaning Avatar 3 will likely be released in 2024, with the two subsequent films set for 2026 and 2028, respectively.

And to gear up for these releases, Disney is re-releasing the original 2009 juggernaut in September so we can catch up on all the details we may have forgotten in 13 years. 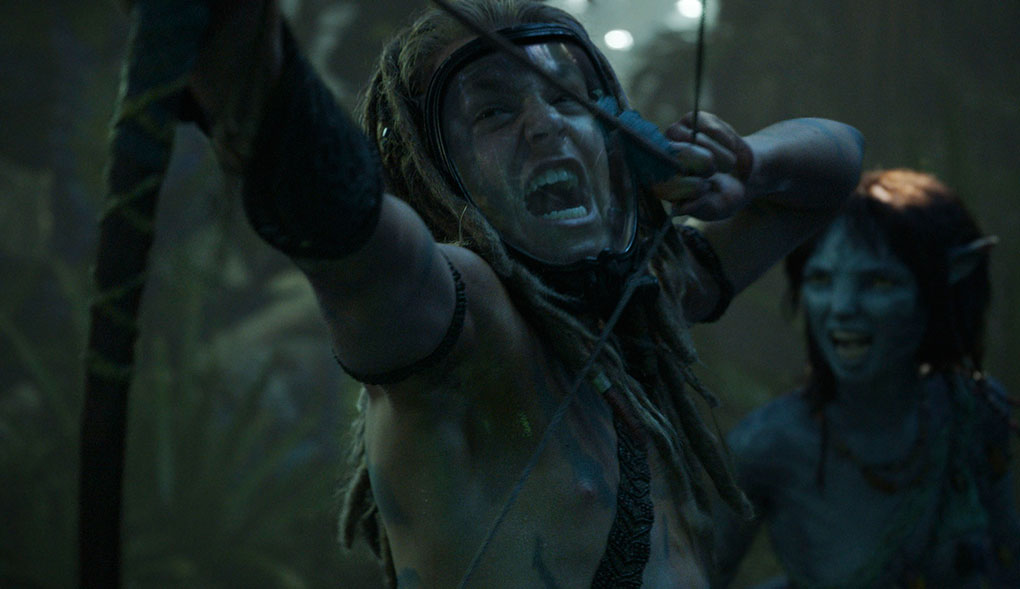 Remember the 3D? It’s back, new, and improved

Avatar was so immersive because it was presented in 3D format, and the sequels have apparently taken that technology to new heights.

At CinemaCon in Las Vegas, Cameron said, “[We are] pushing limits even farther with high frame rate, higher resolution 3D and greater reality in our visual effects. I wanted our return to Pandora to be something really special. Every shot is designed for the biggest screen, highest resolution and most immersive 3D available. I think we pulled it off."

Fans are living for the visuals, even in 2D.