Kenneth Walker is being sued by one of the officers who killed Taylor.
by Allison Bowsher
Getty Images

Tyler Perry just made a large donation to the legal defense fund for Kenneth Walker, the boyfriend of the late Breonna Taylor. A GoFundMe page was set up after Walker was sued by one of the officers who killed his girlfriend on March 13. Perry made four large donations totaling $100,000 to help Walker reach his goal and obtain proper legal counsel.

Perry appears to have used his own name to send the donations over the weekend to match the full total of the campaign’s $100K goal. People have continued to donate, however, and the GoFundMe donations now total more than $104,000. 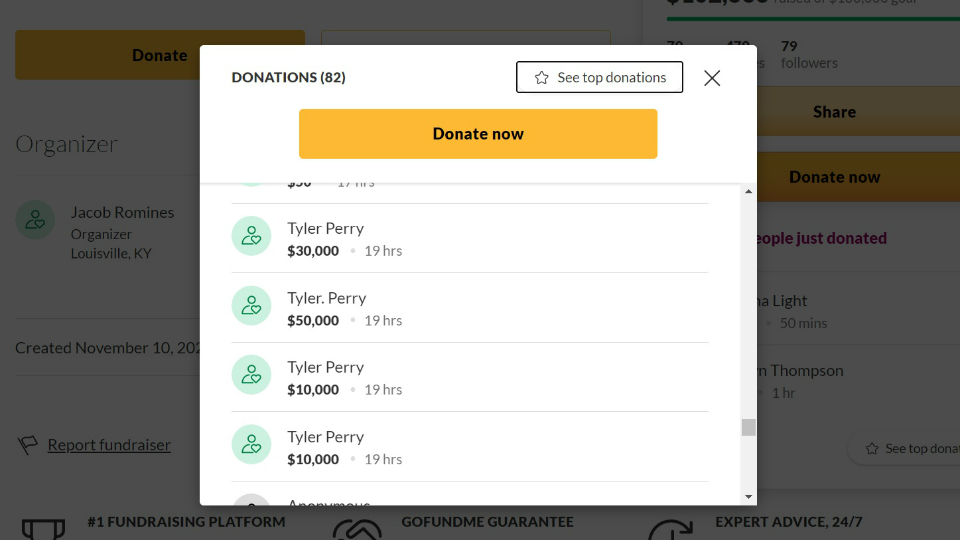 Jonathan Mattingly was one of the three Louisville Metro Police Department plainclothes officers along with Brett Hankison and Myles Cosgrove who executed a no-knock search warrant on Taylor’s apartment in March. The three officers shot and killed the 26-year-old while she was asleep in her bed. Walker was home at the time and believed the officers, who he says did not announce themselves, were intruders. Walker used his registered handgun to fire at the officers, who shot at Walker, Taylor, and neighboring apartments, killing Taylor in the process. One of the bullets from the exchange struck Mattingly in the leg. In October, Mattingly launched a lawsuit against Walker, claiming assault, battery and emotional distress.

“Kenny Walker witnessed his girlfriend’s death at the hands of police officers, was intimidated and targeted by the LMPD before charges were later dismissed and has been through hell since. Now one of the officers on the raid that killed Kenny’s girlfriend is suing him for assault and ‘emotional distress,’” reads the GoFundMe page.

Continuing, the page also addresses the Kentucky Attorney General Daniel Cameron, who has been largely criticized for his ineffectiveness in pursuing charges against the three officers. “The raid that killed Breonna Taylor was poorly conceived, nightmarishly executed, and hastily covered-up. The subsequent grand jury proceedings were farcical and staged. Daniel Cameron’s statements were disingenuous, at best. Jon Mattingly’s lawsuit is the nearly-unbelievable next step in this ongoing mockery of justice.”

RELATED: Everything we know about the Breonna Taylor charges

[video_embed id='2041892']BEFORE YOU GO: Everything we know about the Breonna Taylor charges[/video_embed]

Following Taylor’s horrific death, Walker was arrested and held for attempted murder for firing his weapon at officers, a charge that was later dropped. Mattingly’s lawsuit is the latest development in what has been a cataclysmic injustice that preemptively ended the life of a 26-year-old woman and has forever impacted those closest to her. CNN is reporting that Mattingly’s lawsuit has brought to light the forensics of the shooting and the lack of conclusive evidence over whether the bullet that struck Mattingly was even fired from Walker’s gun.

Breonna Taylor was killed on March 13 while police officers executed a search warrant on her apartment. The officers were reportedly looking for a suspected drug dealer who had been arrested earlier in the day. No drugs were ever found in Taylor and Walker’s apartment. Brett Hankison is the only officer involved in the shooting who has been fired from the Louisville police force. In September, he was charged with wanton endangerment in the first degree for shooting blindly towards the apartments that housed Taylor’s neighbours and has pleaded not guilty. None of the three officers involved in Taylor’s murder have faced any charges in connection with her death.

Perry is one of many celebrities to lend his platform and open his wallet in support of Taylor. Perry’s close friend Oprah Winfrey made history in September when, for the first time in 20 years, she did not appear on the cover of O Magazine and instead featured Taylor. The WNBA dedicated their recent season to Taylor and several celebrities and athletes have shown their support for Taylor on social media, at award shows and during professional sporting events to continue fighting for justice for Taylor and bringing awareness to the Black Lives Matter movement.

Perry’s donation to Walker’s defense fund is the latest philanthropic move from the actor, producer and writer. In November, Perry opened up his film studio in Atlanta to act as a drive-through food bank for those experiencing food insecurity. The event took place over Thanksgiving weekend in the US and helped to provide food and gift cards to local grocery stores for over 5,000 families. In August, Perry donated a van to a women’s organization and in July, Perry gave out 1,000 gift cards to local grocery stores in Atlanta.

BEFORE YOU GO: Athletes and actors react to Breonna Taylor case