The biggest pop culture comebacks of 2022

Like any year, we have had so many micro and macro trends in 2022! And while some of them were brand new, many of the biggest trends (and stars!) this year were actually things we first saw gain popularity in the early 2000s. If you know, you know!

Let's have a look at some biggest pop culture comebacks of 2022!

Love them or hate them, they're making a comeback. As of this December, we've seen Kylie Jenner try this 'thin brows' trend, and the Internet was loving it -- at least on Kylie! Besides our IT girl, we also spotted supermodel Bella Hadid who has been rocking thin brows like it's 2003! 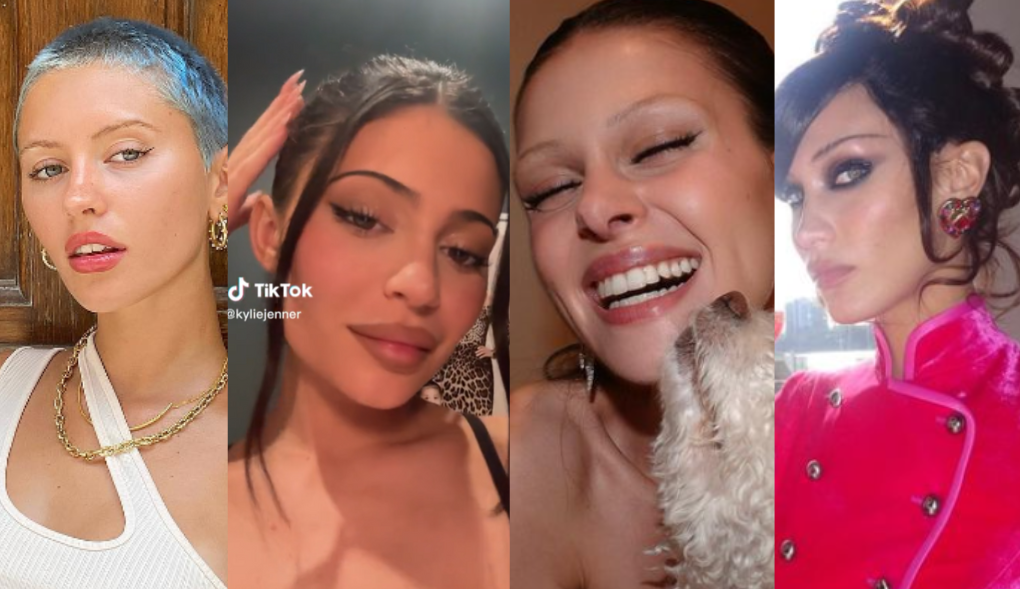 Also following the trend are Iris Law, Nicola Peltz, Rihanna, and more... However, it seems like 'on-fleek' brows are seeing their way out next season.

This comeback was unforeseen-able, to say the least! Gen Z has been so wrapped up in modern and complexly designed nails, it's surprising to see something so simple come back in vogue. However, this summer, a TikToker revived this nail colour by explaining "Red Nail Theory" -- that there's a psychological link between the colour red and male attention. You can read all about it here. 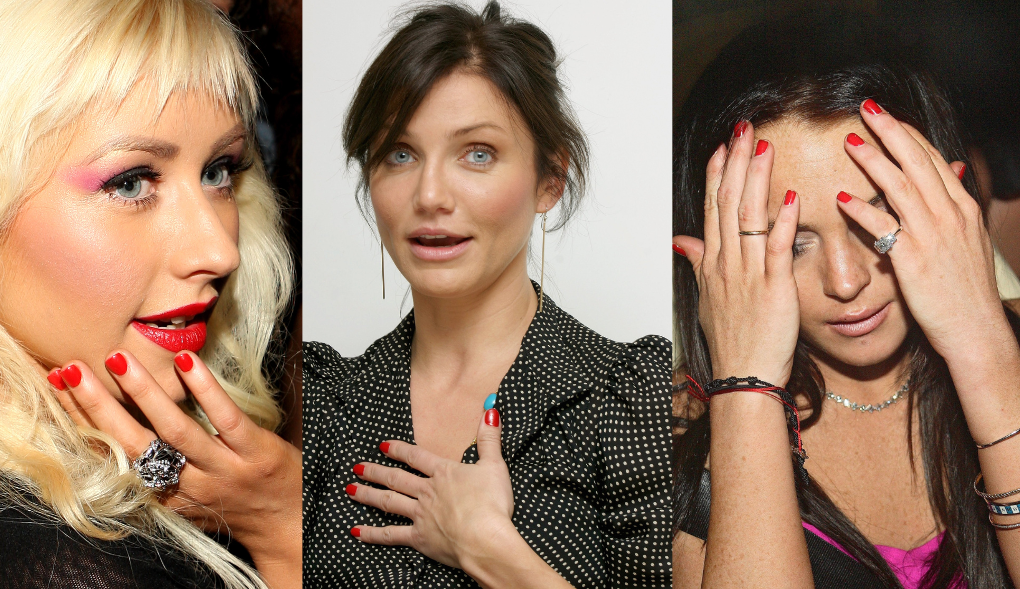 The red nails then became a wave which got even stronger as the Holiday season arrived.

There's no doubt that low-rise jeans are a statement piece of the 2000s era. Just like thin brows, many of us don't fancy them, but fashion is a cycle that repeats itself so here we are again. Gen Z has brought back the low-rise bottoms so well that the signature fashion item was luxurified by so many big fashion houses like BluMarine, Miumiu, and Versace. 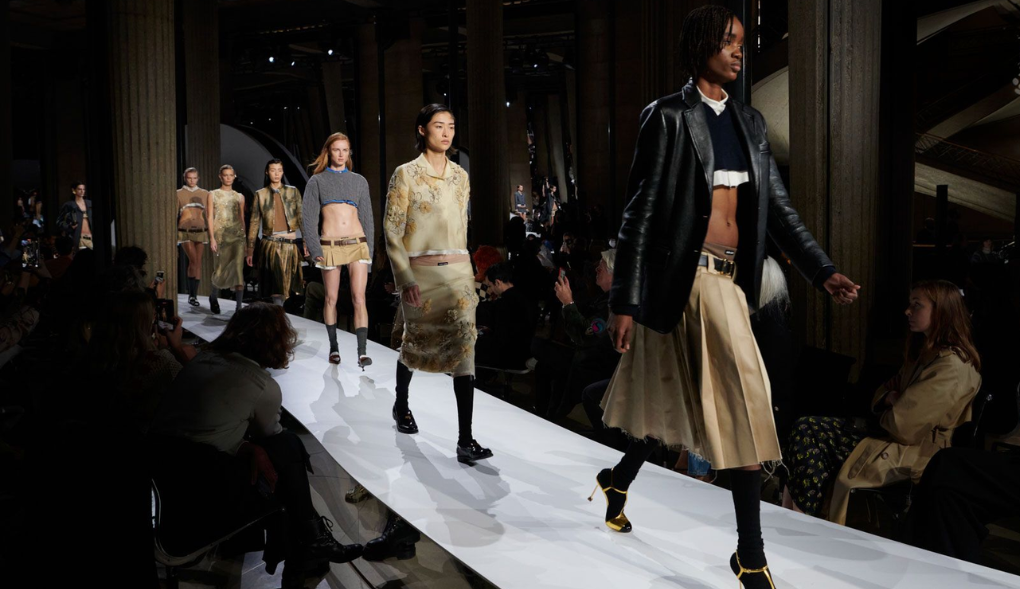 From jeans to khaki to skirts, all low-rise! And, of course, you can't complete a low-rise look without a baby graphic tee -- they are always hand-in-hand! Is this an end of an era for oversized tees?

We don't think so, as we predict after Y2K Fashion, Indie Sleaze will rule 2023, and obviously, a staple of Indie Sleaze is oversized garments.

One of the biggest comebacks for pop culture is the trinity of Lindsay Lohan, Britney Spears, and Paris Hilton. Though they all come back separately in their own ways, Lindsay Lohan re-introduced herself in 2022 as we've never seen her before. The American actress and singer appeared in press tours, live shows, and many more in the most graceful and mature way! 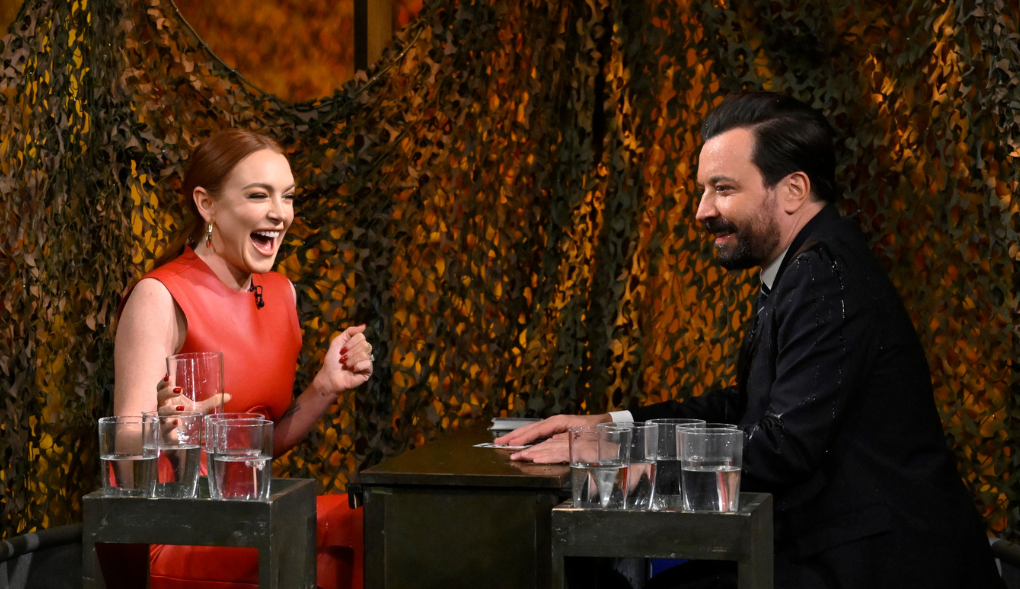 Lindsay got engaged early this year, and the Internet was so happy she's getting the happiness she deserves. It all led up to the Holiday season, where the star returned to film in Netflix's Falling for Christmas, co-starring Glee alum Chord Overstreet. 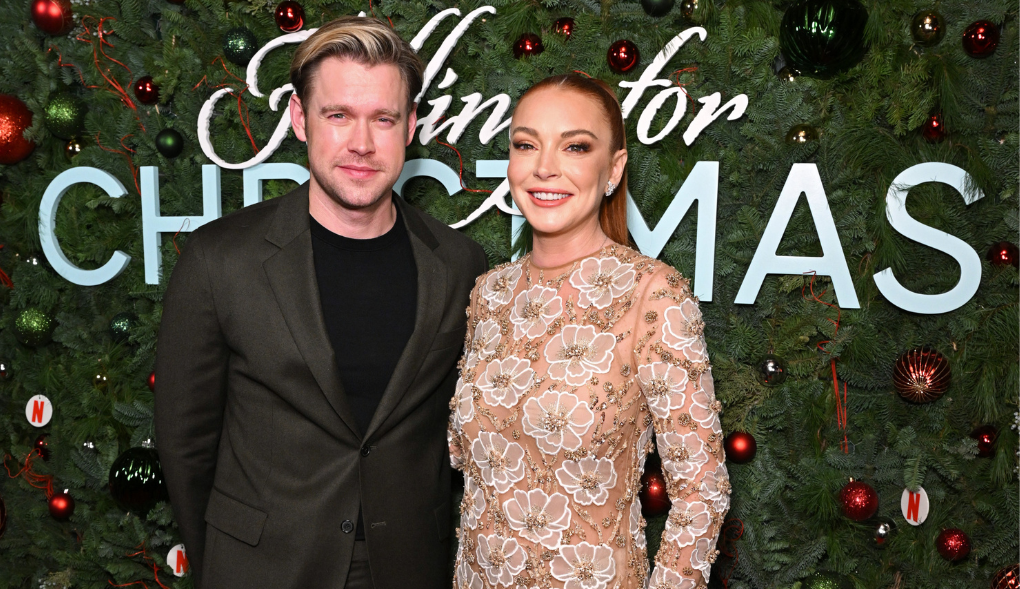 The 2000s icon Paris Hilton re-entered the chat by joining Tiktok this year. In addition to making some iconic content, she also hit the runway for Versace in 2022! NGL, we almost thought that video was from the early 2000s and not this year! The girl doesn't age! 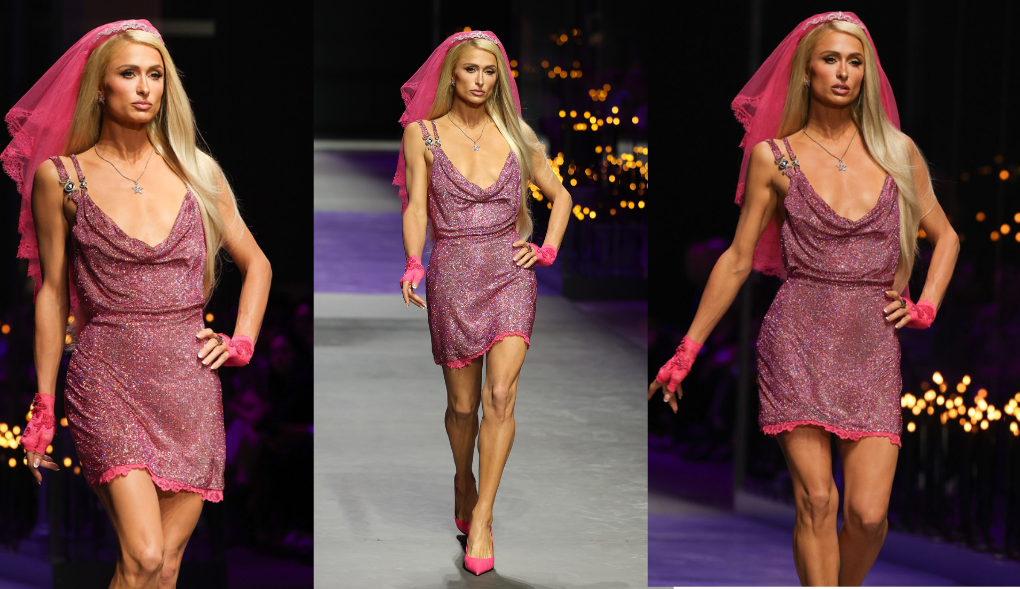 Amid the 'heartbreak' of losing her pup, Diamond Baby, Paris wore the same style of mini slip dress that she wore on her 21st birthday but in pink, strutting down the runway as she closed Versace's runway season Spring Summer 2023.

One of the biggest pop culture moments in 2022, we must say!

Making different headlines across fashion publications, the Britney Spears and Justin Timberlake classic look has resurfaced. Some even claimed 2022 is the year of "Denim on Denim." 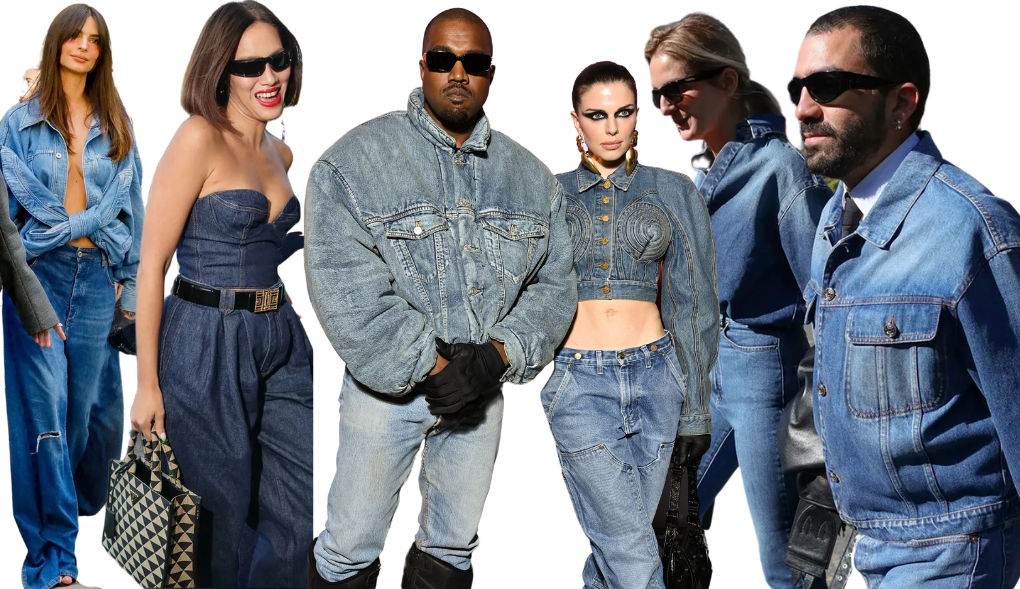 This year we have seen so many stars in denim, double denim or even triple denim! The look has been seen on so many celebrities. You name it, from Michelle Obama to Julia Fox to Bella and Gigi Hadid! Not just celebrities and their stylists support the comeback of this trend but also big fashion houses like Mugler, Marten's Diesel, Vetements and Isabel Marant.

Thanks to Tiktok and its beloved influencer, Addison Rae, the butterfly hair clips first made their comeback in early 2022.

Then comes the Met Gala in May, and that's when we know it's official. The signature pop culture hairstyle is back and making its way into the mainstream as Olivia Rodrigo and Kaia Gerber arrived on the Met red carpet in the accessories. The two beauties showed up in butterfly hairclips and hair down with extra volume. 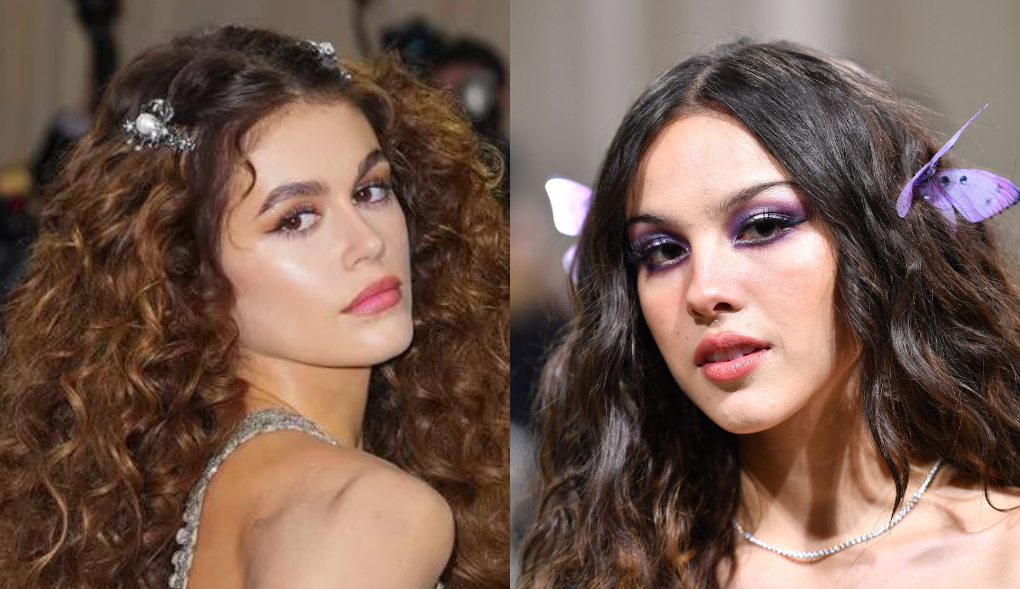 Did you think we could have thin brows without frosted eyeshadow?

Lilac, baby blue, mint, and cool-toned shadows all over the lid were religiously used by many 2000s pop stars like Christina Aguilera and Britney Spears. 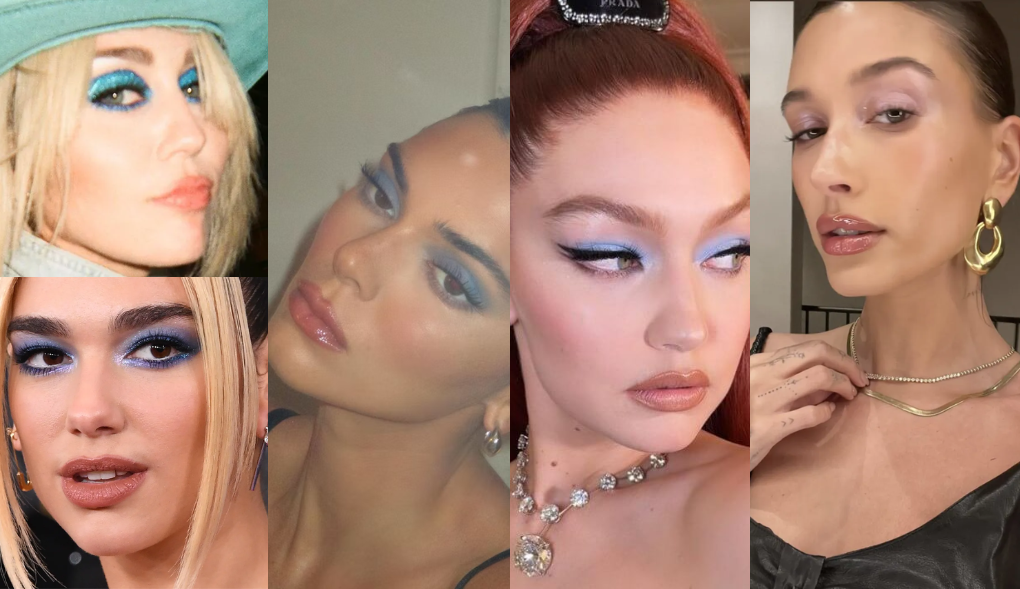 Out of all the trends, we bet this one is the most unwelcome! Just ask Ashley Tisdale.

Katie Holmes made headlines in late 2022 because of what she wore to attend the Jingle Ball. The famous actress rocked a mini satin blue fitted dress over straight jeans and sneakers. But don't blame Katie! 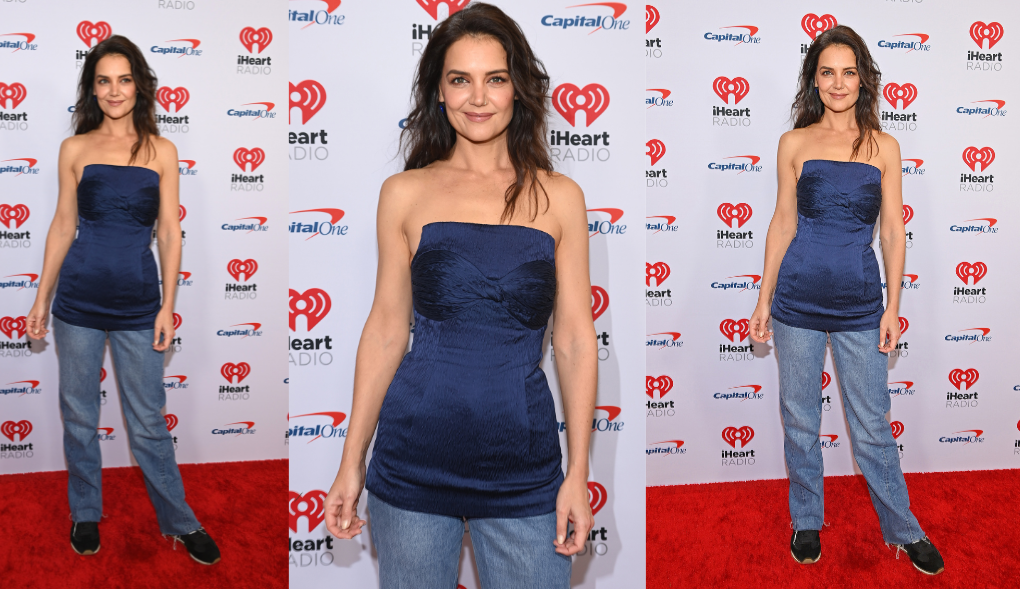 It looks like she just happened to be a trendsetter as many different fashion brands have been lowkey promoting the trend this year. Let's start with Louis Vuitton, the luxury fashion house leading this trend with their floor-length lacey slip dress with straight-fit jeans making an appearance on their runway of Spring 2022. We also have Peter Do and their long-sleeves Ao Dai silk-knitted paired with half-sheer straight-form dress pants in his latest collection this year. While Proenza Schouler, Chloe, and Sacai style their mini dresses with wide-leg flowy pants in the Spring 2023 collections. 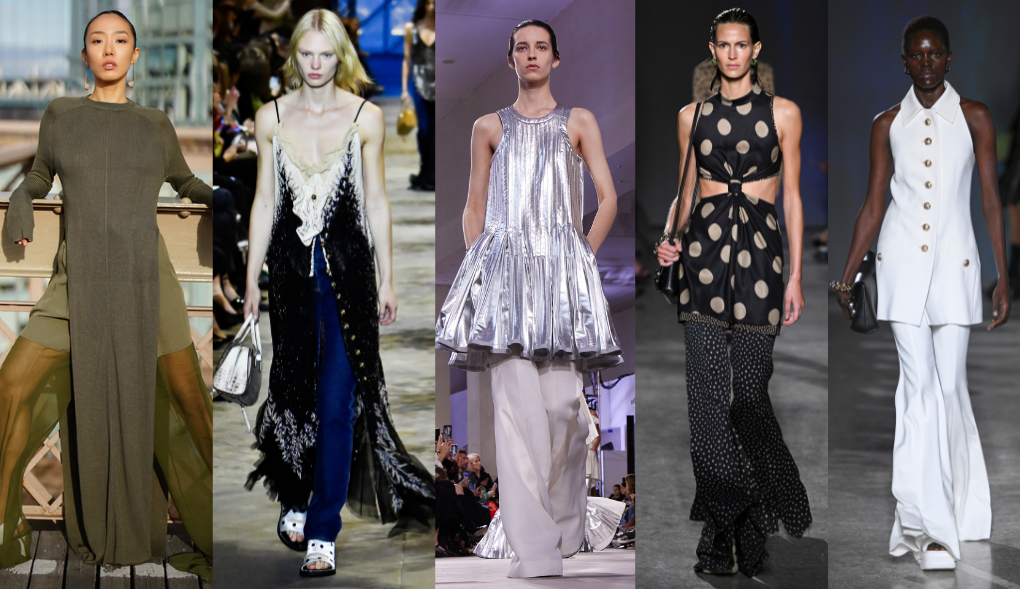