John Cho has played everything from a stoner in search of the perfect slider to an iconic Star Trek character. So what was it that tripped him up about his latest role, in the live-action Cowboy Bebop series? The fear that he was “too sexy,” of course.

The 49-year-old Harold & Kumar Go to White Castle actor sat down for a Vulture Festival panel over the weekend to discuss bringing the beloved anime series to life. There, he was asked whether he felt any pressure over playing the iconic Spike Spiegel character. Without missing a beat, he joked he was scared that he was “too sexy” to play the space cowboy.

Joking or not, maybe he has a point here…

Thirst traps aside, there are definitely some fans out there who would agree that Cho has got it going on in the sexy department.

Ahem. Back at the panel, Cho turned serious when he admitted the pressure was on because fans are so into Spiegel and the franchise. However, he also revealed that as production continued he calmed down a bit. He credits his co-stars (including Mustafa Shakir and Daniella Pineda, who were also on the panel) and the passionate crew members for that. He also said that getting into the character was a huge help, because Spike has a pretty confident attitude. “[He’s someone] who walks around knowing he can do this,” Cho explained.

If you’re not into the anime scene, Cowboy Bebop is a beloved sci-fi, neo-noir series from Japan that has seen international success since its debut in 1998. The 26 original episodes are set in the year 2071, where a travelling bounty hunter crew chase criminals and bring them in for a reward. In the series, these hunters are called “cowboys,” while “Bebop” is the crew’s specific spaceship name.

Spike Spiegel is a former hitman who travels with a former officer named Jet Black, an amnesiac con artist named Faye Valentine, and a genetically engineered Corgi named Ein. The main story revolves around Spike and his rival, a man named Vicious.

In the live-action series, which drops on Netflix on November 19, Alex Hassell plays Vicious, Shakir plays Jet Black, Pineda plays Faye Valentine, and Elena Satine plays a character named Julia, who has romantic ties with both Spike and Vicious.

It’s definitely an intense show. In the past, Cho has said that the role was super demanding on his body—he even tore his ACL on set and production had to take a months-long hiatus as a result. “It was the most challenging role of my life,” he told Hypebeast. “I had to express myself physically in a way I haven’t been asked to do before in terms of the action stuff.”

So will all of that work pay off? Well, so far early critics haven’t been too keen on the new iteration of the series. Indiewire called it a “cosmic disaster,” Polygon likened it to a “Saturday morning cartoon,” and Slate straight-up called it “Netflix’s latest live-action anime mistake.”

IGN seemed to understand what the show was trying to do and even praised it for the strong acting and the show’s obvious love of the source material. But then they added that, “Attempts to add some original flavours to the mix fall flat and nearly threaten the whole project.”

“You want to feel that you have the freedom to do your own thing while honouring the original too. So it was definitely like walking a tight rope in that way,” Cho also said to Hypebeast. “There was this one question that was incessantly asked on set,” he continued. “‘It’s good. Is it Bebop though?’”

Really, now it’s up to the fans to see how they feel about the show when it drops later this week. For now, we’ll just drop this production still here to get you in the mood as we all await the big premiere. 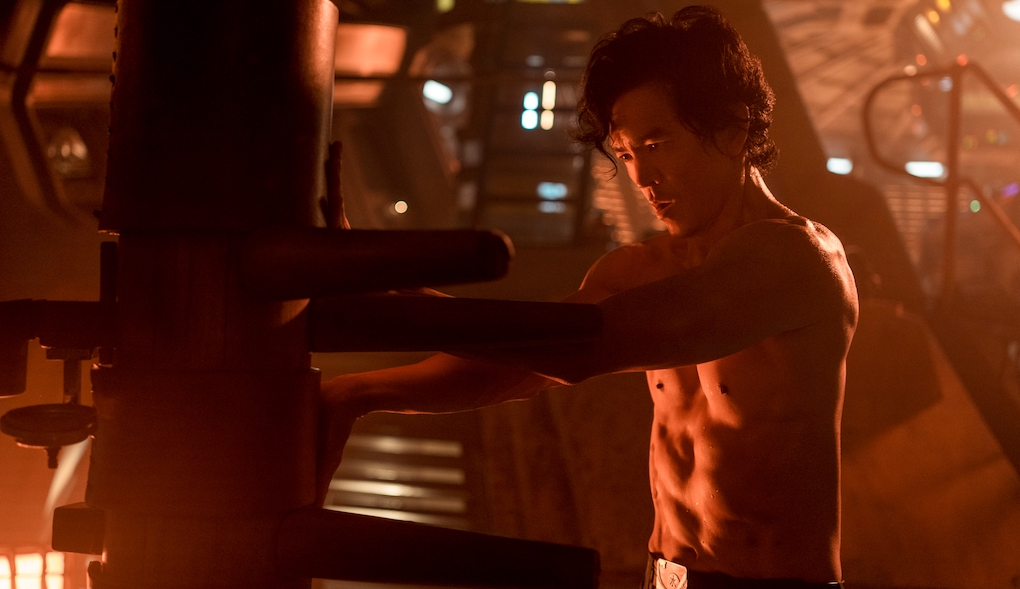 BEFORE YOU GO: Paris Hilton is married