From glam to the after-party, what it's like to be a star at the Emmys

Your behind-the-scenes peek at how everyone from the cast of 'The Crown' to 'Mare of Easttown' celebrated Emmy night.
by Sadaf Ahsan

Last night's Emmy Awards may not have been entirely scintillating if you were watching from home, but if you were one of the stars at the show? And better yet, a winner? It was a hell of a time.

From getting glammed up prior to the ceremony to the after-parties, here's a behind-the-scenes sneak peek at some of the ways the celebs really enjoyed their night.

From Gillian Anderson (who also thanked fans for helping her hit two-million followers) to Sarah Paulson and Holland Taylor to Hannah Waddingham, some pampering was in order just ahead of the show. Meanwhile, plenty of stars, including Tessa Thompson, Michaela Coel, Niecy Nash, Mandy Moore, Tracee Ellis Ross, Mary Elizabeth Winstead and Ewan McGregor, struck a pose in their go-to looks. Oh, and Catherine Zeta-Jones and husband Michael Douglas shared a cute little video on their way to the show.

Each of the night's winners, including basically all of Ted Lasso's cast, Kate Winslet, Josh O'Connor, and Ewan McGregor had a moment backstage to pose alongside their newest best accessories: that Emmy trophy.

Oh, and Gillian Anderson snapped a few shots of herself and The Crown co-stars Olivia Colman and Emma Corrin.

Oh, and here's for an unlikely trio: O'Connor, Zach Braff and Ted Lasso's Brett Goldstein had a moment at the show. Buddy comedy, please? Maybe?

Then it was onto a few after-parties, with Anya Taylor-Joy being dressed as per usual in a stunning look, featuring a cape, lacy crop top and shorts – I mean! She was headed to the Sunset Tower Hotel.

Over in London, the cast of The Crown partied until 4 a.m., with a batch of Emmys all their own.

And Mare of Easttown stars and winners Kate Winslet, Julianne Nicholson and Jean Smart cozied up with their new hardware and each other at the HBO/HBO Max awards reception at San Vicente Bungalows.

The Weeknd was also there for some reason, hobnobbing with just about everyone.

And finally, if you happened to be at that very party, you might've caught a glimpse of two legends – Conan O'Brien and Michaela Coel – saluting each other. That is what we like to see. 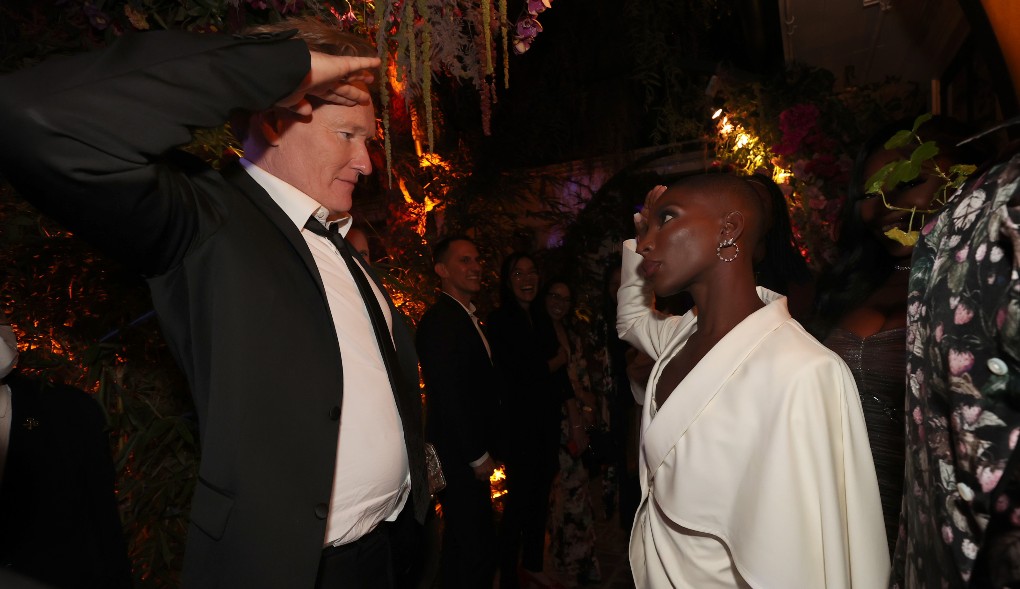 BEFORE YOU GO: Every Must-See Look At The Emmys

The Kardashians are big fans of Canadian brand Ambari Beauty