'I don't have to be that 19-year-old body shape anymore because I'm not.'
by Christine Estima
Getty Images

A trip down memory lane, but make it fashion! Selena Gomez is reflecting on her style evolution in a new Vogue “Life in Looks,” and everything from her Jessica Simpson style days in 2007 to her latest 2021 music video “De Una Vez" are up for critique.

The singer, actress, and cooking show host has a lot of choice words for her past ensembles. “Oh, I’m nervous,” she cringes as she turns the page onto a photo of a red carpet look from 2007. “Oh, it’s bad. It’s so bad!”

She really does love many of her past choices (her Versace gown at the 2013 VMAs or her Prada gown at the 2016 AMAs are style highlights in her life), but when it comes to her 2015 Met Gala outfit, a white Vera Wang gown, she reveals just how much she struggled to put on a brave face.

"I fluctuate a lot with my weight," she told Vogue. "I remember this night specifically I didn't feel good about my body."

Instead of wallowing or refusing to attend, Selena reveals how she and her style team collaborated to make this look a *lewk*; which helped her come to the empowering realization that inhabiting a womanly body involves ebb and flow. 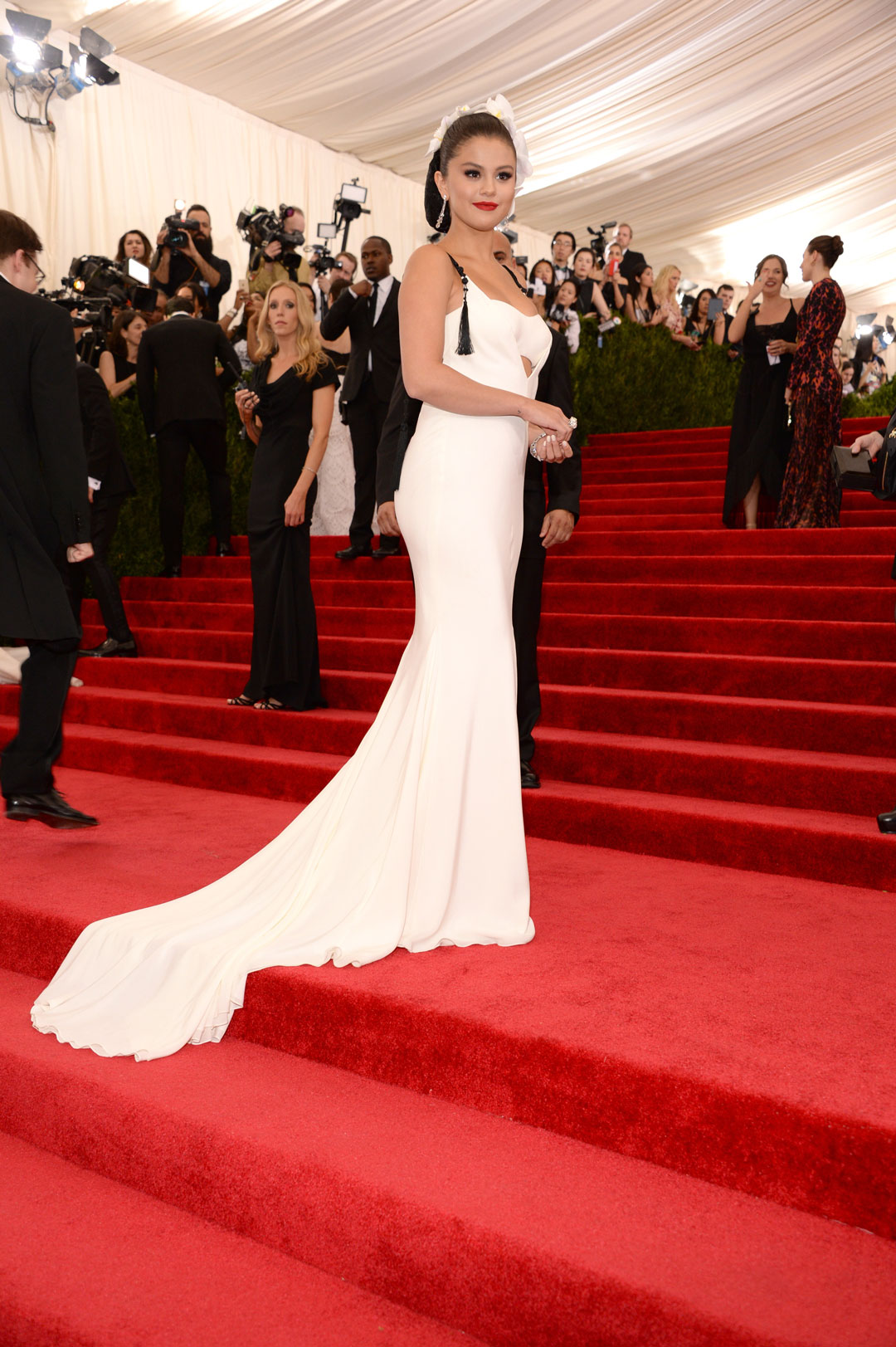 “So what was really amazing was that I actually got a chance to work on the dress that fit my body,” she explains. “I had such a beautiful time shaping this dress. I think that we came together and built something really beautiful and something that fit me really well.”

“That was one of the moments where I was like, 'I don't have to be that 19-year-old body shape anymore because I'm not.'”

Those body feelings came up again in 2019 when she walked the The Dead Don't Die movie premiere red carpet wearing a Celine dress. 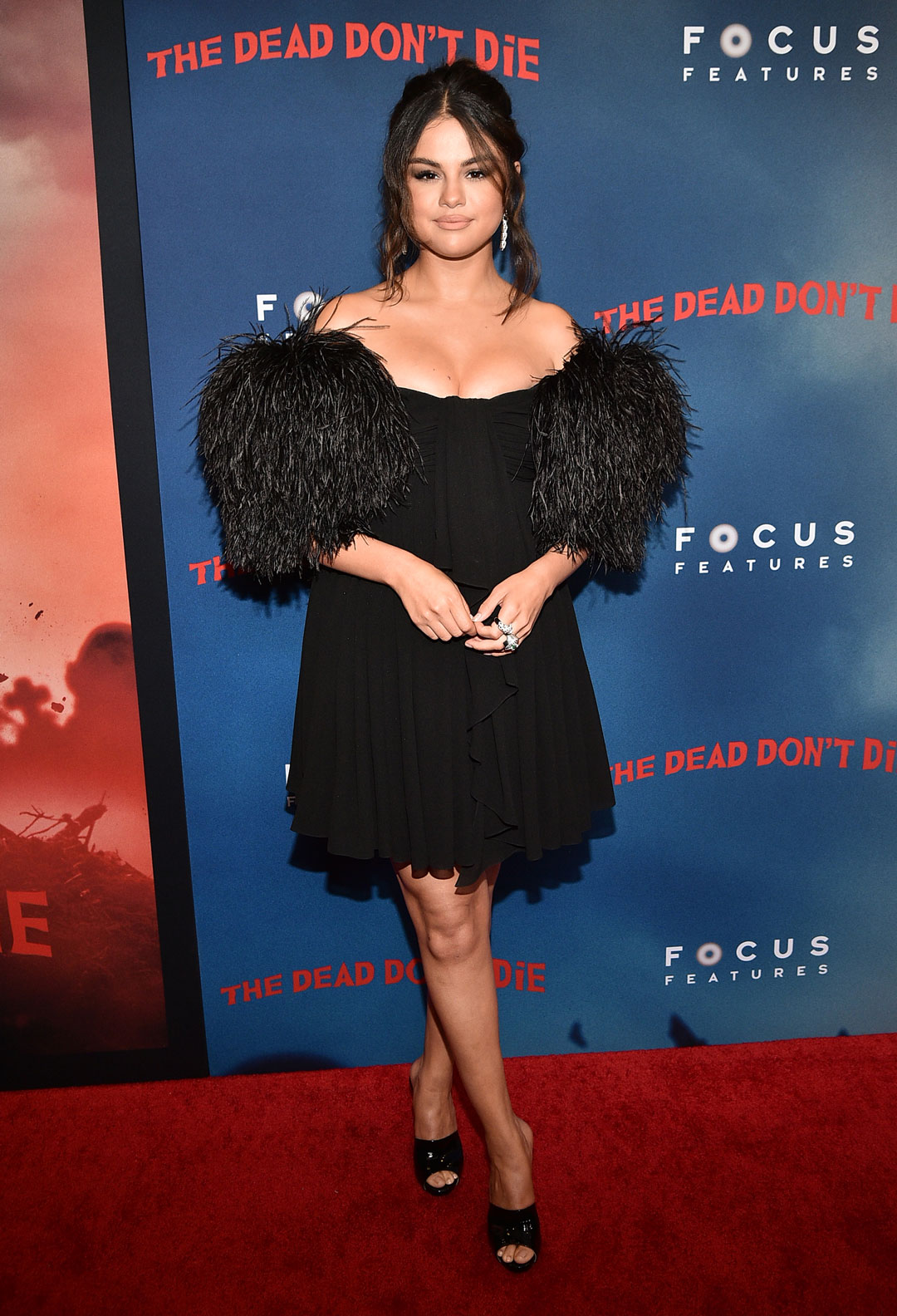 “So this was also a moment in my life where I had fluctuated in weight. And I'm very honest with the people on my team so I didn't wanna wear anything tight,” she explained and then, gesturing to her cleavage, added, “And then I tried this dress on and I felt so beautiful. It definitely highlighted this area a lot!”

When reflecting on her outfits from music videos, movies, and concert tours, she also revealed that her bestie (and occasional cooking buddy) Taylor Swift was a major style inspiration for her.

“To be honest, when I was younger, Taylor inspired me a lot when it came to wardrobe and stage outfits,” she said while talking about the colourful, bedazzled bustier dress she wore for the 2011  “Love You Like a Love Song” music video.

“I thought it was my time to cross over and become a pop star, whatever that was to me then. It was just really fun. I think that was the first time I tried to be high fashion. And you can laugh at that — because that’s not high fashion,” she said.

As she began to take risks with her fashion choices, like wearing a dinosaur sweater in 2017 or a comfy striped PJ look by Leset to dinner in 2019, she realized she needed to blend style with comfort. Speaking about her Revival concert tour, she reveals the skin-tight bejeweled catsuit she wore for the opening number was inspired by none other than Britney Spears.

“It’s so hard to tour when you’re a female because you have all of this pressure to add multiple looks throughout the show and you want it to pop but you have to make it comfortable for yourself and realistic to dance in or to perform in,” she said.

“This one, we did for the opening act. I’m not gonna lie, Britney Spears inspired it from ‘Toxic’ so I wanted to find a moment where that could kind of have its place.”

She hasn’t forgotten about that "Toxic" catsuit, however. It still has a place in her closet, and occasionally, she whips it out for fun.

“Do I put it on and try to sing? Sometimes.”