‘Mr. Perfectly Fine’ is rumoured to be about the JoBro.
Allison Bowsher
Getty Images

Taylor Swift has found a devoted Swifte in actor Sophie Turner even when the subject of the song is rumoured to be about Turner’s husband, Joe Jonas. In Swift’s newly released “Mr. Perfectly Fine,” which was taken from the Vault Collection of songs Swift wrote and didn’t release during the making of her 2008 Fearless album, Swift sings about a boyfriend who broke her heart and quickly moved on with someone new. Joe, is that you?

Swift dropped her new-old single “Mr. Perfectly Fine” earlier this week and Jonas’ name quickly began trending on Twitter, with many fans guessing the song was written about the JoBro. Swift and Jonas briefly dated prior to the release of Fearless and Swift famously put Jonas on blast while appearing on The Ellen DeGeneres Show, revealing that the singer had broken up with her in a 27 second phone conversation. Swift later apologized for talking about their breakup on air and the pair even hung out years later while Jonas was dating Swift’s friend, model Gigi Hadid. So, it’s water under the bridge!

Speaking of the bridge, and the chorus, and the banging intro, Swift dropped “Mr. Perfectly Fine” and unleashed yet another powerful breakup anthem onto the world. Swift joked about the departure from her folklore and evermore eras, writing in her Instagram stories “Me in 2020: life is chill, writing some songs based in fiction to avoid drama, feeling pretty grown up. My 2008 music from the vault in a goblin voice: ‘Reeeeeelease Mr. Perfectly Fiiiiiiiine.’” 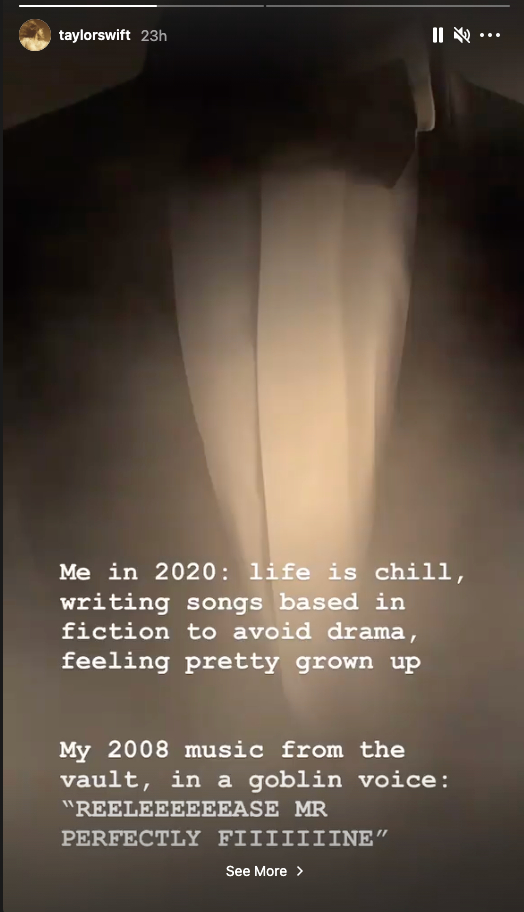 Swift has previously used Jonas and their breakup as inspiration for her writing, including “Forever & Always” from Fearless, as well as the Speak Now songs “Last Kiss” and “Better Than Revenge,” which includes a controversial line about Jonas’ ex-girlfriend Camilla Belle. Following the release of “Mr. Perfectly Fine,” Jonas’ wife Sophie Turner was quick to share the song on her Instagram stories, calling it ‘not not a bop.’ Proving that time (and maybe music) heals all wounds, Swift was quick to respond and show her allegiance to Sansa Stark. 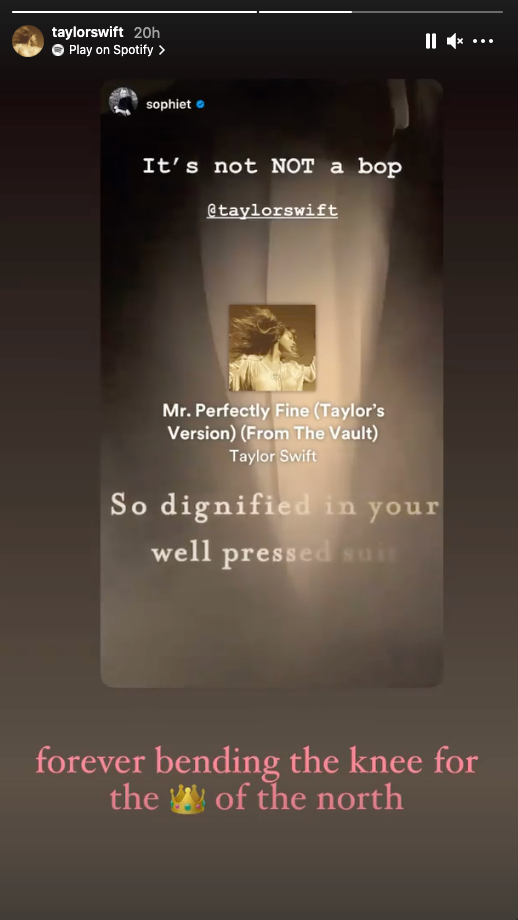 The full album of re-recordings of Fearless tracks plus a handful of Vault songs will be released Friday. In addition to “Mr. Perfectly Fine,” Swift has already dropped the track “You All Over Me” featuring Marren Morris, which also has hints of being inspired by Swift’s time with Jonas (the song references the pair meeting in June).

The new collection of songs will also include “That’s When” featuring Keith Urban, which acts as a full-circle moment for the country turned pop singer. “I’m really honored that @keithurban is a part of this project, duetting on ‘That’s When’ and singing harmonies on ‘We Were Happy,’” wrote Swift on Instagram after releasing the full tracklisting on April 3. “I was his opening act during the Fearless album era and his music has inspired me endlessly.”

It’s unclear whether anymore of the new Vault songs are also about Jonas, but as long as they are a bop, Swift will continue to have a fan in the Queen of the Nawth.

BEFORE YOU GO: Thandiwe Newton is 'taking back' her full name