The families got together for the 'Pass the Phone' challenge and Reign Disick was the star of it all.
Katie Scott
Getty Images

Kourtney Kardashian and Travis Barker continue to keep us entertained and wanting more in 2021. Kardashian shared several photos from her recent ski vacation to Deer Valley, Utah, with Barker and their respective children on Monday.

The Keeping Up with the Kardashians star’s pics showed her hanging out on a snowmobile with Barker’s 15-year-old and 22-year-old daughters, Alabama Luella and Atiana De La Hoya (daughter of Barker’s ex-wife, Shanna Moakler, whose bio dad is Oscar De La Hoya).

"Up to snow good," Kardashian captioned the photos.

She also shared some photos of herself with her youngest son, Reign, and captioned them, "Chilling."

Barker posted several different highlights from the snow-filled trip on his Instagram account, including one hella cute video of him and Kardashian getting cozy by the outdoor fire.

He captioned the photo, "Real is rare 🖤," and we are NOT OK. This is so cute!

Alabama posted a TikTok from the family trip, where they all played the "Pass the Phone" challenge as they sat around the fire.

"I'm passing the phone to my boyfriend," Kardashian said as she passed the phone to Barker and all of our hearts filled with joy to hear those words leave her mouth.

Barker said he was passing the phone to someone with a tampon in his nose, which was his son Landon.

Landon said, "I'm passing the phone to somebody who's changed their outfit five times today." Of course, Kardashian was handed the phone and she said she was passing it to someone who talks 24/7 and Reign appeared.

It looks like Kardashian and Barker were having a lot of fun hitting the slopes and riding around on snowmobiles before they both headed to Palm Springs, Calif. to spend the rest of the Easter weekend with the Kardashian-Jenner crew.

Kardashian made it official with Barker in February when she shared a photo of them holding hands on Instagram and the Blink-182 drummer reshared her post on his Stories and that's what you call Instagram-official, folks!

It's unclear how long the pair have been together but it's not an unusual match. Travis and Kourtney have been friends for 15 years and first met in 2006 when Barker was dating Paris Hilton and Kim K was her assistant/stylist/closet organizer. He actually encouraged the Kardashian to make their hit reality series after starring in his own family reality show, Meet The Barkers, in 2005. We're still patiently waiting to get a look at the beginning of their relationship in the final season of KUWTK.

Kourtney and Travis are basically neighbours in Calabasas, California and they are both owners of their own lifestyle and wellness companies, making this is a match made in heaven.

In March, Barker broke his silence on his relationship with the eldest Kardashian and spilled the tea on all the reason why she's the voice inside his head (we know you Blink-182 fans sang that part).

During an appearance on The Drew Barrymore Show, Barker said his relationship with Kardashian “comes natural,” and he admires that she’s also a single parent like him.

“And now, I'm spending time with a woman who's, like, a great mom, who's, like, a great friend and you don't have to worry about any of those things, it just comes natural," Barker told Drew. “It's a maturity thing. And I also like missing someone and cherishing the time that I spend with them, instead of every day being with them — especially in the beginning of the relationship. I think missing someone's so important."

Last month, a source close to Kardashian, told E! News that her and Barker's relationship was still going strong.

"He is a great boyfriend and really treats her well," the insider shared. "He showers her with gifts and compliments. She's enjoying it. It's very easy to date him because they have known each other for so long. He was always into her and it finally happened."

"They have a great foundation from being friends for so long," the source added. "They have fun together. Their kids like each other and it's working for now. She's loving the attention and having Travis in her life in this new way."

We love that for her! 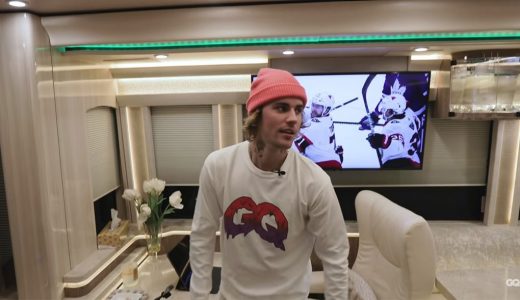