The dress is too good not to repeat.
by Katie Scott
Getty Images

Tiffany Haddish has become one of the most fashionable repeat outfit offenders. The 41-year-old comedian loves her iconic Alexander McQueen dress and she wants to make sure she gets her money's worth and make the expensive garment count.

Haddish told People that she has worn this dress in public eight different times, which means she has gotten the cost of the dress down to at least $500 per wear and we are not mad at that! The Bad Trip actress has previously said that spending $4,000 on a dress may seem like a common purchase for a celebrity, but for her, it's a testament to her hard work.

Haddish told People that this beautiful dress holds a lot of sentiment for her. "It was like, wow I'm having these huge moments in this dress. I spent so much money, and every time I wear it, it's like another huge moment," she said, teasing, "Maybe the next time I wear it, it'll be at my wedding reception!"

The Night School actress admitted that she planned on returning the dress but she was unable to and that's what made her decide to get her money's worth with the expensive garment. "I was just like devastated. I was very upset that I spent that much money on a dress period. Then I was like, 'Well, I'm going to wear this dress everywhere I go then. I'm going to get my money's worth.'"

Let's take a look back at all the times Haddish wore the beautiful McQueen gown and celebrate the dress that keeps on giving.

Premiere of Girls Trip in 2017

Haddish debuted her sleeveless white McQueen gown that features a jewelled collar and a slit up the side on the red carpet for the 2017 premiere of Girls Trip in Los Angeles at the Regal LA Live Stadium 14 in July. 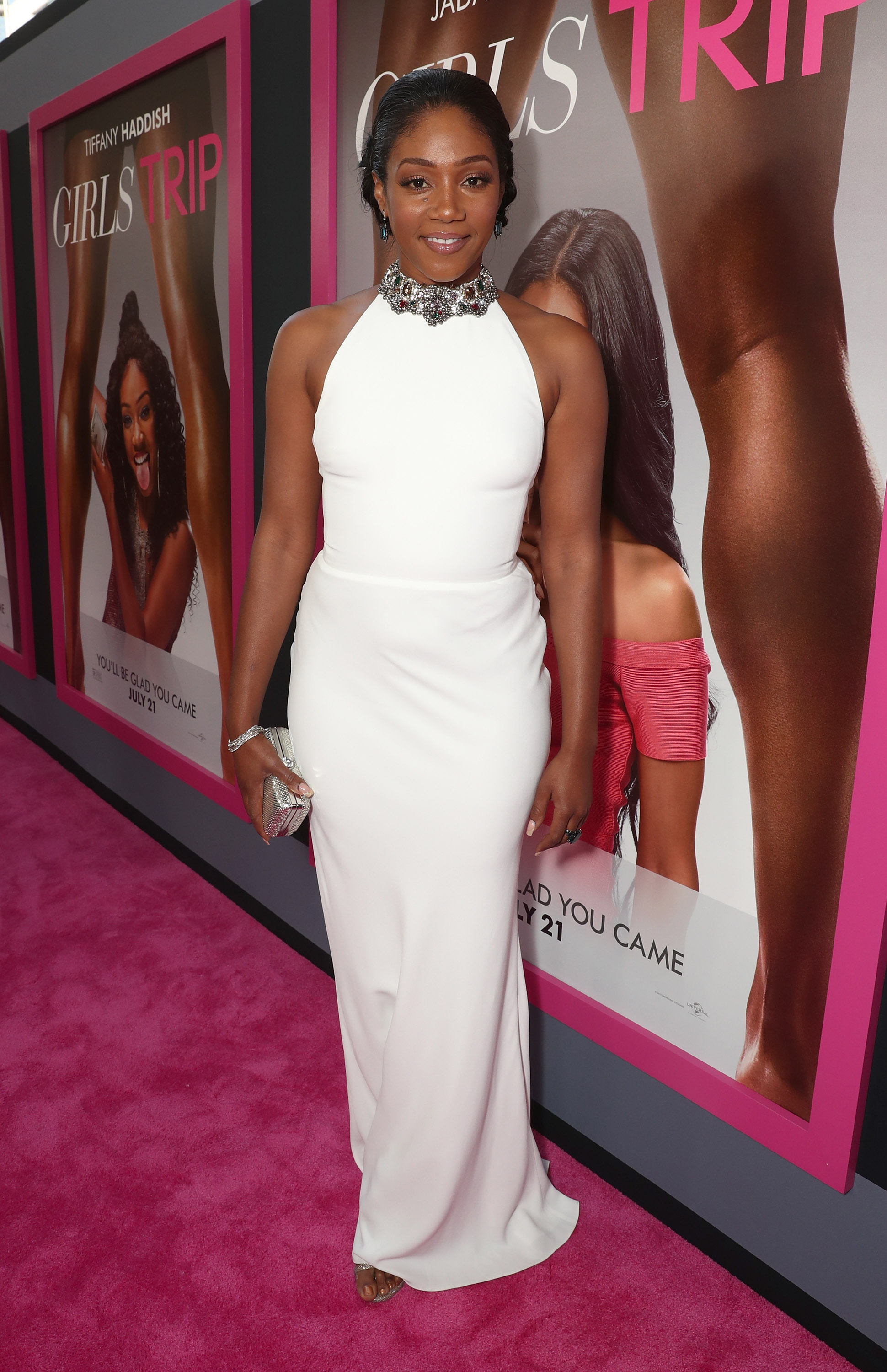 Haddish has made history in this beautiful gown! She became the first Black female stand-up comic to host Saturday Night Live in November 2017. Throughout her time on the show, Haddish joked about already wearing the dress to walk a red carpet for Girls Trip and she showed it off again as she glided through the Weekend Update. Haddish joked that her whole team told her "Tiffany you cannot wear that dress on SNL. You already wore it. It's taboo to wear it twice!"

She told her team she don't give a "dang about no taboo. I spent a lot of money on this dress. This dress cost way more than my mortgage. This an Alexander McQueen, OK!"  She promised that she would even wear it to her next wedding and warned people not to invite her to their weddings because she will show up in the dress. Sorry not sorry to that bride.

Remember when Haddish and Maya Rudolph had their moment on the Oscars stage together and we all demanded they star in a buddy comedy together? We're still waiting on that but Haddish rocked her McQueen gown on stage that evening. Rudolph and Haddish came out to present the awards for Best Documentary Short Subject and Live Action Film. They had all the jokes about wearing high heels during award season and #OscarsSoWhite.

“A few years ago, people were saying that Oscars were so white and since then some real progress has been made,” Rudolph began. “But when we came out together, we know some of you were thinking, ‘Are the Oscars too black now?’” Haddish continued. “But we just want to say, don’t worry. There are so many more white people to come tonight,” Rudolph said. 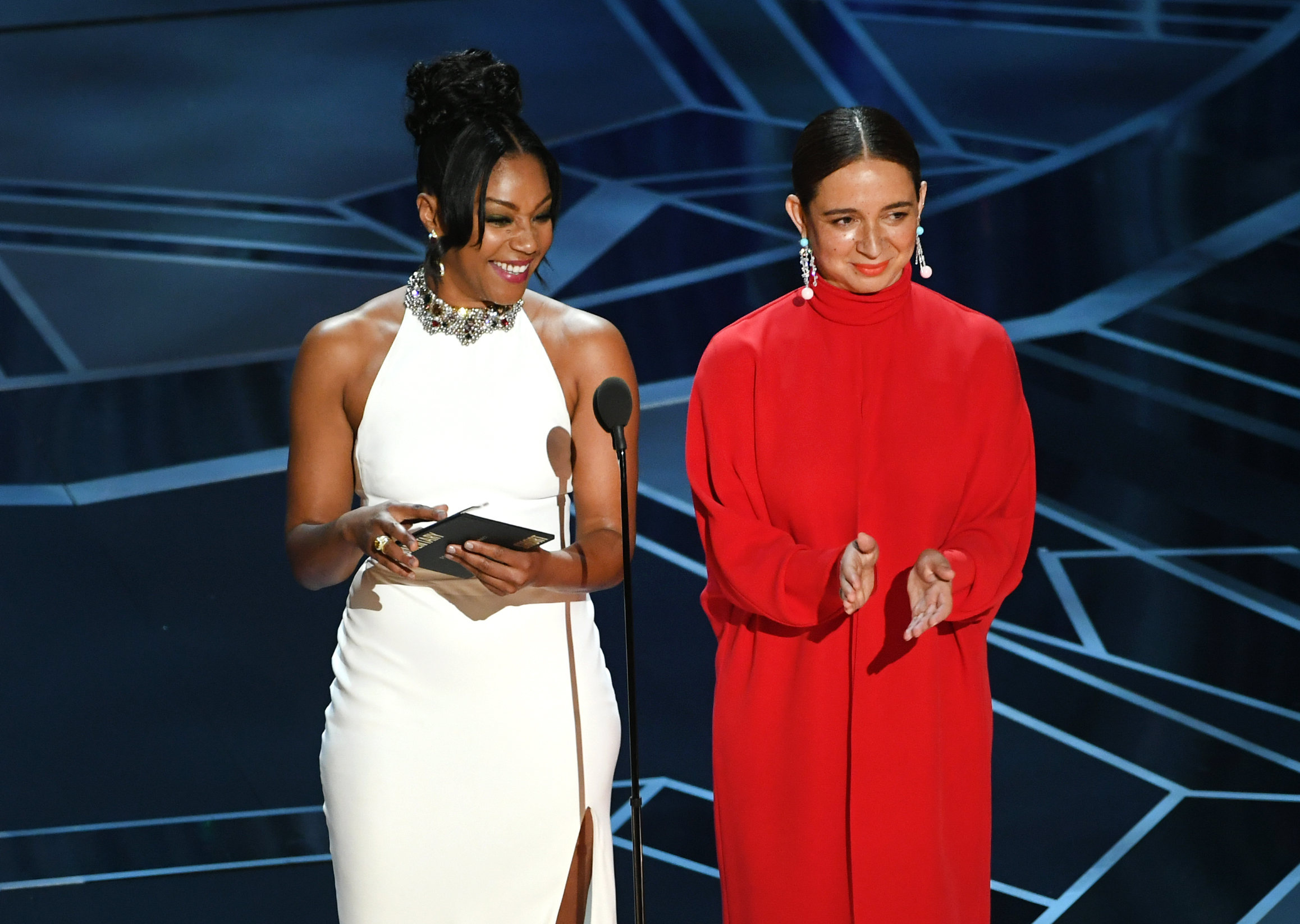 Haddish hosted the 2018 MTV Movie and TV Awards and she brought all the laughs and wore multiple different looks, including the McQueen gown. Not only did she do an amazing job at hosting the two-hour ceremony, but she also took home the award for Best Comedic Performance for her role in Girls Trip. 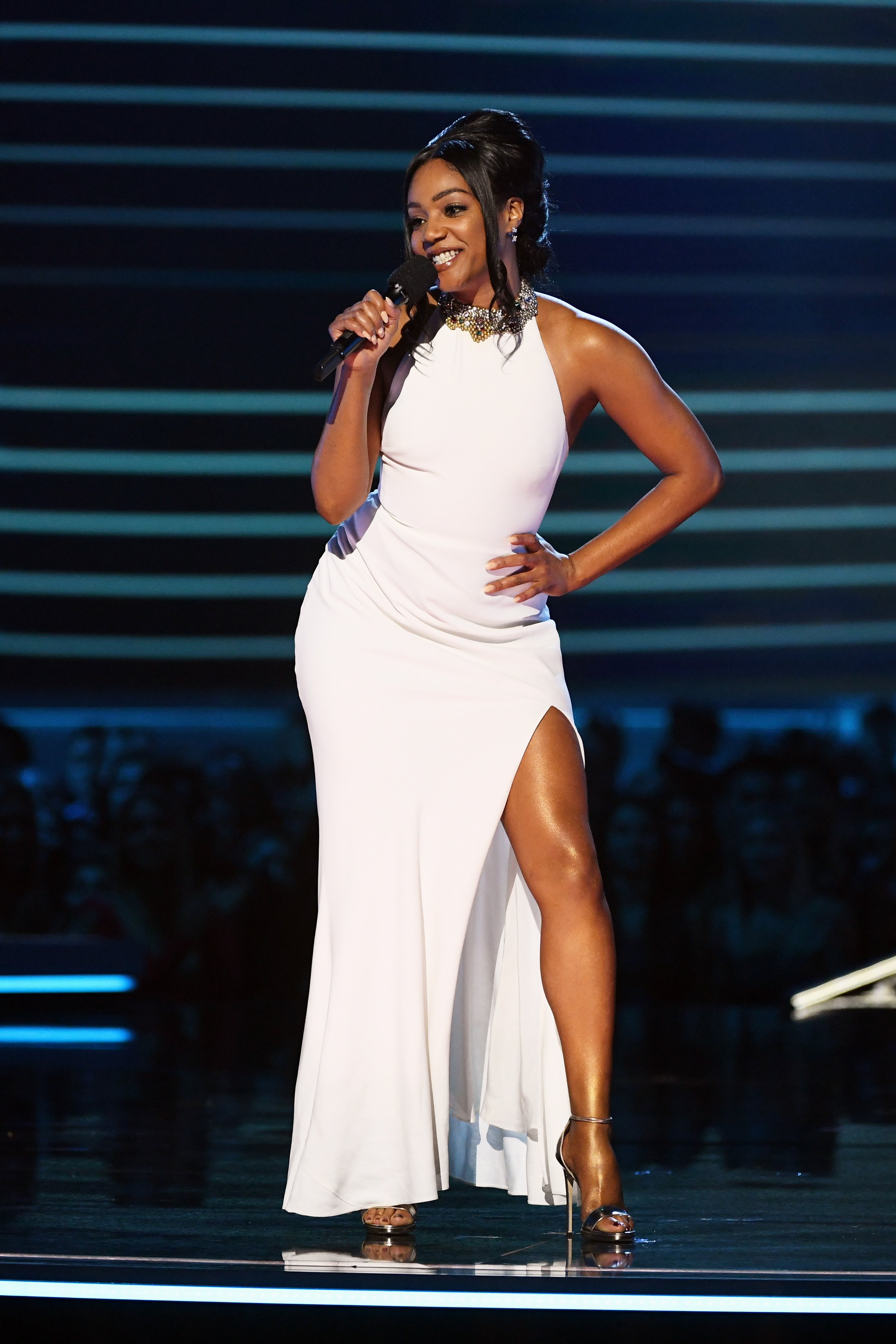 My Next Guest Needs No Introduction with David Letterman in 2019

Haddish wanted viewers to know they haven't seen the last of her iconic $4,000 gown so she wore it during her appearance on My Next Guest Needs No Introduction with David Letterman. During her interview, Haddish reflected on her childhood, her success and everything in between.

She hinted at retiring her dress, saying, “I love this dress and it’s getting tight. Like my career is getting big and I think my body is getting bigger.” When Letterman asked her how many times she's worn the dress, Haddish replied, “Five, six, 18 times. I wear it to the grocery store, I wear it to the DMV. That’s how I get recognized. It’s how I get to the front of the line.” 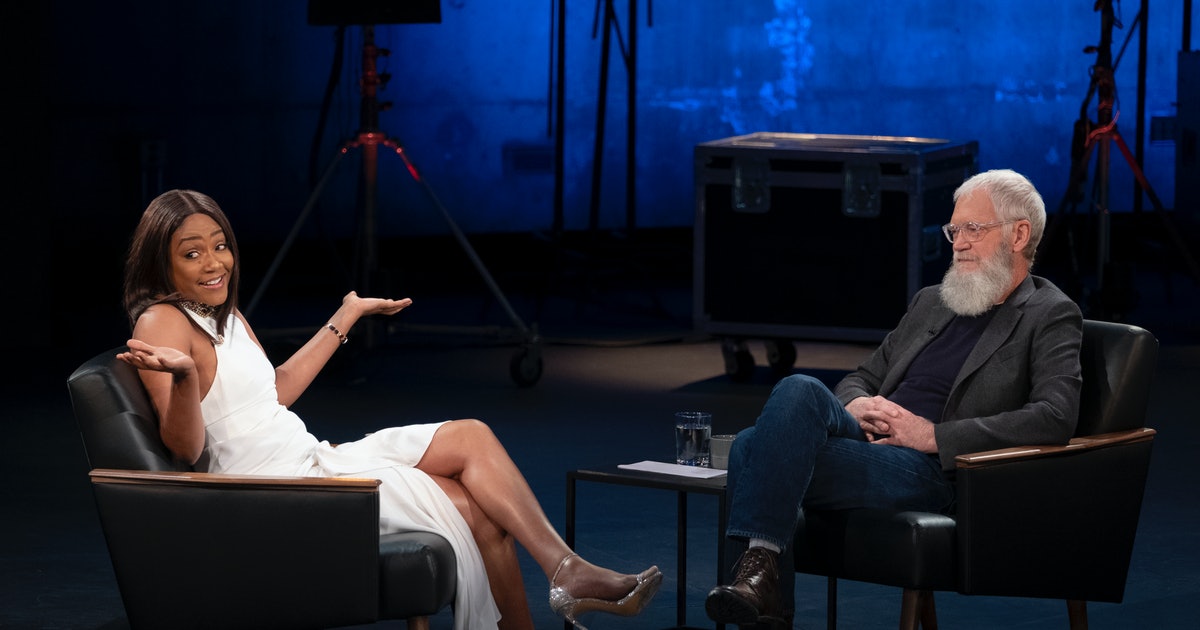 Haddish pulled the famous white dress back out of her closet for her recent photoshoot with People by Brooke Nipar for the magazine's 2021 Beautiful Issue. "This is the longest-running joke in Hollywood," the comedian said while modelling the "gown that keeps on giving."

She also revealed that her boyfriend, rapper Common, said that he thinks it's "hilarious" that she keeps wearing the dress. "He thinks it's so funny, she added. "He's like, 'Man, you're really practical. I like that. You're thinking about the money, and I like that about you.'" 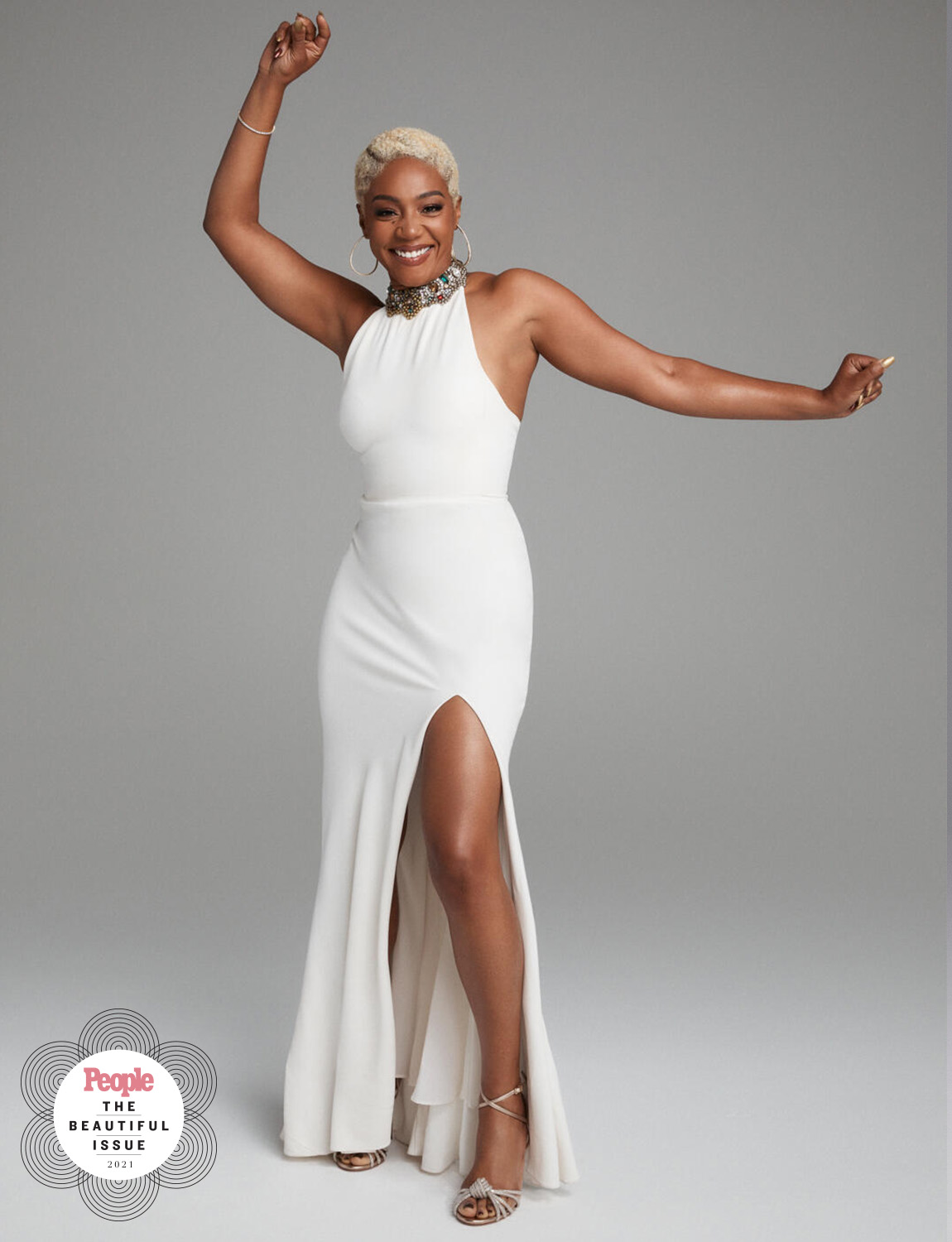 According to People, the shoot would mark the dress' eighth public appearance, but we've only been able to find six. We guess that means she actually does wear the dress to the grocery store and the DMV. Here's to hoping we see Haddish wear this dress on many more red carpets!

BEFORE YOU GO: Beyoncé shares rare photos with her kids on social media