The leaked DMs allegedly from the actor claimed that he is a cannibal.
Katie Scott
Getty Images

Armie Hammer was trending over the weekend as the actor found himself in the middle of a scandal after someone leaked DMs of private conversations that allegedly involved his Instagram account. The messages have not been confirmed to belong to the actor, but that didn’t stop people on Twitter from talking about them.

The leaked DMs that allegedly belong to Hammer’s account include extremely graphic messages about cannibalism and sex acts. In one of the messages, Hammer allegedly says, “I am 100 per cent a cannibal. I want to eat you.” Another message alleged that the actor had cut “the heart out of an animal” and ate it. Other screenshots include alleged messages from the actor asking if he can drink people’s blood.

The DMs have not been confirmed to belong to the actor, but the memes began rolling in almost instantly.

Many fans have labelled the DMs as fake, but writer Jessica Ciencin Henriquez, who was linked to Hammer in September, says the DMs are very real. Henriquez and Hammer were spotted together in September 2020, just after his split from his wife of 10 years, Elizabeth Chambers.

Henriquez took to Twitter to address the viral DMs, writing, “If you are still questioning whether or not those Armie Hammer DMs are real (and they are) maybe you should start questioning why we live in a culture willing to give abusers the benefit of the doubt instead of victims. 🤔 TW// sexual violence.” She attached the screengrabs of the tweets and added the definition of abuse in another tweet. 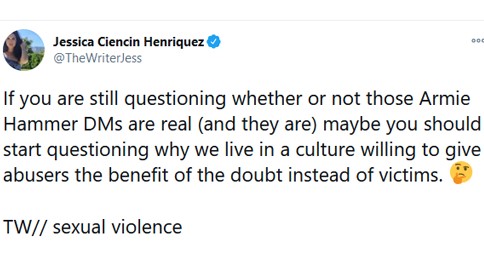 “Because some of you made it to adulthood without knowing what this is. Abuse: cruel and violent treatment of a person or animal,” she wrote. Before deleting her entire Twitter account, Henriquez wrote, “Stop defending men who abuse women.”

This isn’t the first time Hammer has trended on Twitter because of his kinks. The Call Me By Your Name actor began trending in 2017 after many of his followers discovered he had liked tweets about bondage and other fetishes.

It remains unclear if Hammer sent the alleged DMs or if social media users edited them. Hammer has not commented on the messages as of this writing.

BEFORE YOU GO: This hand symbol is a call for help from domestic abuse victims

[video_embed id='2045722']BEFORE YOU GO: This hand symbol is a call for help from domestic abuse victims[/video_embed]

Dr. Rheeda Walker on her book 'The Unapologetic Guide to Black Mental Health'

Rufus Wainwright on being an open book in the Audible Original 'Road Trip Elegies: Montreal to New York'